Liverpool head to Goodison Park to take on Everton on Saturday lunchtime. Here is the side I think Jurgen Klopp will select for the game:

Liverpool will need to put their Champions League exploits to one side when they head to Goodison Park to take on Everton on Saturday lunchtime.

Goalkeeper: Loris Karius is expected to keep his place between the sticks with Simon Mignolet once again on the bench.

Defence: The Liverpool defence gave their all during the impressive 3-0 victory over Manchester City on Wednesday night so I think Klopp will be tempted to rest a couple of players.

The Reds boss has very little options in the middle of defence as Joel Matip, Joe Gomez and Ragnar Klavan are out injured so Dejan Lovren will once again start alongside Virgil van Dijk.

However, we could see Alberto Moreno come in for Andrew Robertson at left-back while Trent Alexander-Arnold could also be rested with Nathaniel Clyne pushing to make his first start of the campaign.

Midfield: Emre Can has missed the last two games with a back injury and I don’t see Klopp rushing him back for this game as he’ll want the German international 100% fit to face Man City next week.

Jordan Henderson has been ruled out of the Champions League second leg through suspension so he’s certain to keep his place on Saturday while James Milner should also keep his spot in midfield after another impressive outing last night.

Georgino Wijnaldum is pushing for a recall after being left out against City and the Dutch international should come back in to the starting eleven.

Adam Lallana has been ruled out for a few weeks after sustaining a hamstring injury at Selhurst Park last weekend but Klopp is hopeful the midfielder will play again this season.

Attack: Mohamed Salah is a major doubt after limping off during the early stages of the second half against City with a groin problem. The Egyptian international says the injury isn’t serious but I don’t think he’ll be risked against Everton.

Therefore, we could see Alex Oxlade-Chamberlain moved in to a more advanced role and he’ll be in confident mood after scoring a stunner against City.

I’m sure Klopp would ideally like to rest more of his key men but this is still an important game and he doesn’t really have the required quality on the bench to come in.

So I think we’ll see Sadio Mane keep his place in attack with Roberto Firmino also leading the line up front and the likes of Dominic Solanke and Danny Ings named on the bench. 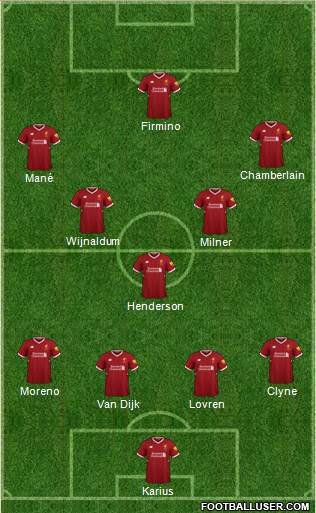