Jurgen Klopp has offered a fitness update on Mo Salah, Emre Can and Andrew Robertson ahead of Liverpool’s clash with Man City.

Liverpool will look to book their place in the semi-finals of the Champions League when they take on Manchester City at the Etihad Stadium on Tuesday night.

Jurgen Klopp has been speaking to the media at his pre-match press conference this afternoon and he’s provided a team news and injury update ahead of the game.

The Reds boss is hopeful Mohamed Salah will be able to return to the squad after missing the draw at Everton on Saturday with a groin injury that he picked up in the first leg win over City.

Salah limped off during the 3-0 victory at Anfield last Wednesday night with a minor groin problem and the Egyptian international will be assessed later this evening to see if he’s fit for the trip to the Etihad.

Andrew Robertson also missed the Everton game at the weekend with a knock while Alberto Moreno was a late withdrawal due to a thigh injury and the full-backs will also be checked over at training tonight.

When asked for a team news update, Klopp told Liverpoolfc.com:

“No real clue in the moment because we have to wait a little bit. You can imagine, in this short period between games, it is quite difficult so I have to wait each minute I can and that’s what I’ll do. There’s nothing new in the moment, we will see.

“We will see in five hours until we train and we’ll know who is involved in that. I don’t know in the moment 100 per cent, but I am quite hopeful we will have a bigger squad than we had at Everton.”

“The guys who were on the bench at Everton – Ox, Bobby and Trent from the first-team squad – for them, it was good not to play too long. They are fine, they were fine when I left Melwood yesterday.

“With Mo, Robbo and Alberto, we have to wait a little bit but of course [we have] big hope they will be back.”

No doubt Liverpool will give Salah and Robertson every chance to prove their fitness ahead of the City game as the pair have been integral to Klopp’s starting eleven this season. 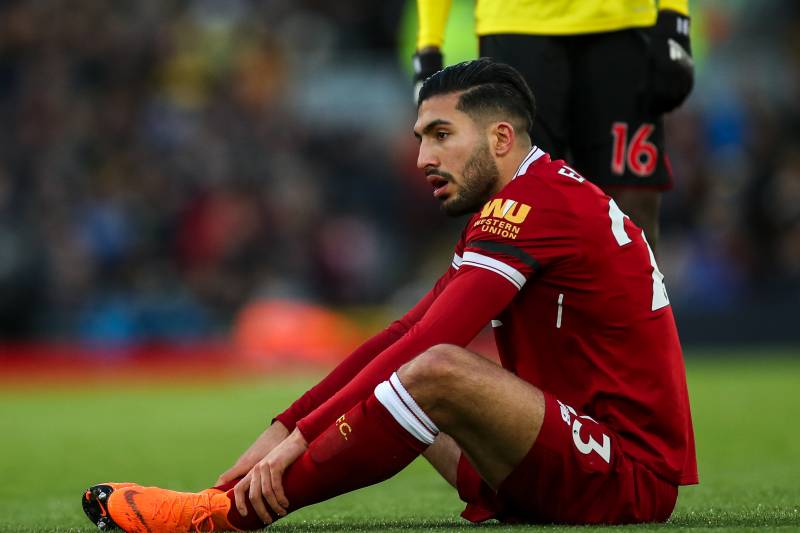 However, it looks like Emre Can is set to miss out once again as the German international is struggling to overcome a niggling back injury that’s hampered him in recent weeks.

Can suffered the injury before the international break last month and was initially expected to return in time to face City last week but the injury has proven difficult to shift and Klopp is reluctant to put a timeframe on his recovery.

“That is not in the best place. He [Can] is receiving treatment and we’re still hoping it will be a little bit quicker than maybe we thought in the first moment. But we cannot say anything else.”

Jordan Henderson is also suspended so with Can still on the sidelines, it looks like Klopp will have little option but to go with a midfield of James Milner, Georgino Wijnaldum and Alex Oxlade-Chamberlain tomorrow night.

Liverpool will also be without Adam Lallana due to a hamstring injury while Joel Matip and Joe Gomez remain on the sidelines so Dejan Lovren will continue alongside Virgil van Dijk in defence.