Man Utd midfielder Paul Pogba has made the cut after his derby heroics but it’s Tottenham who dominate the WhoScored? Premier League Team of the Week.

Manchester United midfielder Paul Pogba has made the cut after his derby heroics but it’s Tottenham who dominate the WhoScored? Premier League Team of the Week.

Pogba was the inspiration as he scored two quick-fire goals early in the second half to help United come from 2-0 down to beat Manchester City 3-2 in a dramatic clash on Saturday evening.

Chris Smalling netted the winner to deny City the chance to seal the title but it was Pogba who stole the headlines and the Frenchman has made it in to the WhoScored? TOTW with a score of 8.6.

Tottenham all-but guaranteed a top four finish this season with a hard fought 2-1 victory over Stoke City at the Britannia Stadium on Saturday afternoon and three of Mauricio Pochettino’s players have made the TOTW.

Christian Eriksen scored their first goal and has officially been awarded the winner after his free-kick from the wing appeared to evade everybody before finding the back of the net – although Harry Kane swears he got a touch.

Eriksen’s performance earned him a score of 8.6 to make the Team of the Week and he’s been joined by team mates Serge Aurier and Mousa Dembele after they put-in solid performances against Stoke.

Arsenal’s Danny Welbeck returned to form with a brace during their 3-2 victory over Southampton on Sunday and he’s made the cut along with Burnley duo Nick Pope and Kevin Long.

Here is the WhoScored? Premier League Team of the Week: 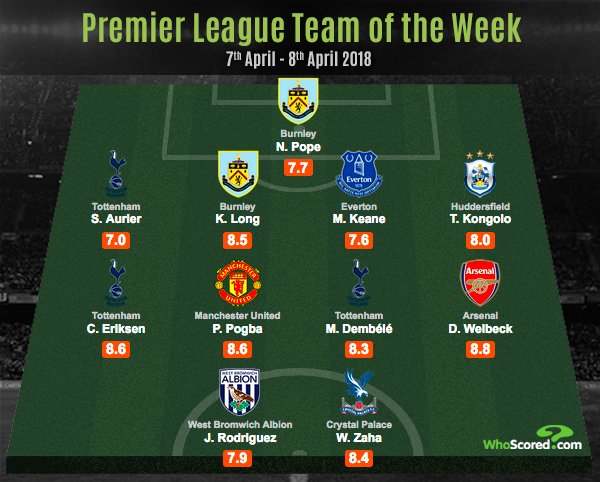