Liverpool take on Manchester City at the Etihad Stadium this evening. Here is the side I think Jurgen Klopp will select for the game:

Liverpool will look to book their place in the semi-finals of the Champions League when they take on Manchester City at the Etihad Stadium this evening.

Goalkeeper: Loris Karius produced a wonderful save to keep a clean sheet during the 0-0 draw at Everton on Saturday and he’s expected to keep his place ahead of Simon Mignolet tonight.

Defence: Andrew Robertson is set to return after missing the Merseyside derby with a minor knock. The left-back trained yesterday and should replace Ragnar Klavan in the starting eleven.

Trent Alexander-Arnold is also set for a recall after being rested against Everton meaning Nathaniel Clyne will make way after making his first start of the season at the weekend.

Joel Matip and Joe Gomez are out injured so Dejan Lovren will once again start alongside Virgil van Dijk in the middle of the back four.

Midfield: Emre Can has once again been ruled out with an on-going back injury that’s kept him out since before the international break while Jordan Henderson is suspended.

It means Klopp has little option than to go with James Milner, Georgino Wijnaldum and Alex Oxlade-Chamberlain – who’s due a recall after being rested at the weekend.

Adam Lallana has also been ruled out for a few weeks after sustaining a hamstring injury but Klopp is hopeful the midfielder will play again this season.

Attack: Liverpool have been handed a major boost as Mohamed Salah was able to train yesterday and looks to have won his race to be fit after recovering from a minor groin injury.

The Egyptian international sustained the problem in the first leg last week and missed the Everton game on Saturday but is expected to return to the starting eleven against City tonight.

Roberto Firmino will also be recalled after being named on the bench against Everton at the weekend while Sadio Mane will keep his place in the attack.

Therefore, Danny Ings and Dominic Solanke will drop to the bench after being given rare starts on Saturday afternoon. 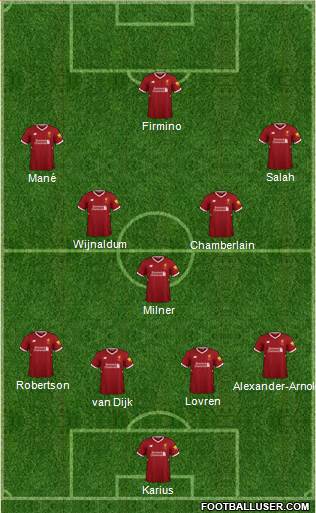