Arsenal face CSKA Moscow in the quarter-finals of the Europa League on Thursday night. Here is the side think Arsene Wenger will select for the game:

Arsenal will be looking to finish the job and book their place in the semi-finals of the Europa League when we take on CSKA Moscow on Thursday night.

Here is the side think Arsene Wenger will select for the game:

Goalkeeper: David Ospina has been ruled out for another two weeks with an ankle injury so Petr Cech will continue between the sticks.

Defence: Wenger opted to rest Laurent Koscielny against Southampton at the weekend so he’s set to be recalled tomorrow night with Calum Chambers the man expected to make way.

Shkodran Mustafi and Hector Bellerin should keep their places in the back four but Nacho Monreal will get a recall at left-back with Sead Kolasinac dropping to the bench.

Midfield: Granit Xhaka has been ruled out of the game after being left in north London with a bout of flu so Mohamed Elneny should start in the defensive midfield position tomorrow.

Aaron Ramsey was rested for the win over Southampton on Sunday afternoon while Jack Wilshere was a late substitute so they should both come back in to the side.

Attack: Pierre-Emerick Aubameyang is ineligible so Alexandre Lacazette will get a recall to lead the line up front and he’ll be looking to build on his brace from the first leg last week.

Henrikh Mkhitaryan has been ruled out for a month with a knee ligament injury that he sustained last week so the emphasis will be on Mesut Ozil to be the creative force and he was outstanding in the first leg.

Danny Welbeck will be hoping to keep his place after scoring twice at the weekend but I think Wenger may keep him on the bench as he’s a versatile option to have in reserve with the England international able to play on the wing or up front.

Therefore, Alex Iwobi could be the man to start alongside Ozil in attack and he should be in confident mood after an impressive display against Southampton. 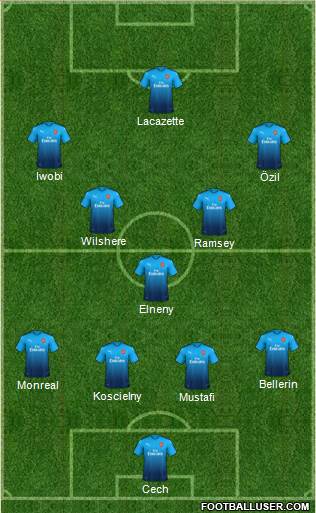