Liverpool take on Bournemouth at Anfield on Saturday evening. Here is the side I think Jurgen Klopp will select for the game:

Goalkeeper: Loris Karius is now the established number one at Anfield so the German is expected to keep his place between the sticks with Simon Mignolet on the bench.

Defence: Klopp may be tempted to rotate his full-backs again as Andrew Robertson and Trent Alexander-Arnold gave their all during the win over City on Tuesday night.

Nathaniel Clyne came through 90 minutes against Everton last weekend and could get another run-out at right-back while Alberto Moreno may get a rare chance on the left.

Joel Matip and Joe Gomez are out injured so Dejan Lovren will once again start alongside Virgil van Dijk in the middle of the back four.

Midfield: Jordan Henderson returns from suspension so he should come straight back in to the midfield but Emre Can is unlikely to play again this season due to a back injury.

James Milner could be the man to make way for Henderson as Georgino Wijnaldum and Alex Oxlade-Chamberlain should keep their places in the middle of the park this weekend.

Adam Lallana has also been ruled out for at least another two weeks with a hamstring injury but Klopp is hopeful the midfielder will play again this season.

Attack: Mohamed Salah made a successful return from a minor groin problem by scoring during the win over City and the Egyptian international will be looking to tighten his grip on the Golden Boot by adding to his goal tally against Bournemouth.

Roberto Firmino was outstanding at the Etihad Stadium in midweek so no doubt he’ll keep his place up front with Sadio Mane joining him and Salah in attack once again.

That means Danny Ings and Dominic Solanke will have to make-do with places among the substitutes on Saturday evening. 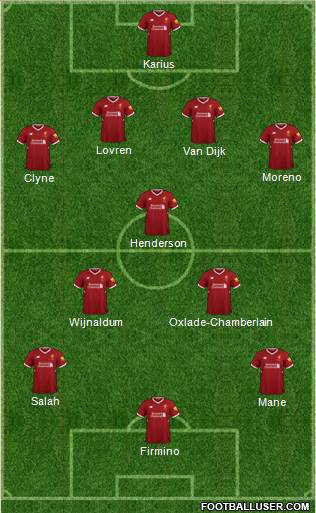