Chelsea take on Southampton at St Mary’s on Saturday afternoon. Here is the side we think Antonio Conte will pick for the game:

Chelsea will be looking to get back to winning ways following a poor run of form when they take on Southampton at St Mary’s on Saturday afternoon.

Goalkeeper: Thibaut Courtois made a successful return to action last weekend after recovering from a hamstring injury so he’ll keep his place ahead of Willy Caballero.

Defence: Gary Cahill was recalled for the 1-1 draw at home to West Ham last weekend but I think we might see Andreas Christensen come back in to the middle of defence on Sunday.

Cesar Azpilicueta should keep his place on the right-side of the back three while Antonio Rudiger could also be retained but David Luiz is still working his way back from a long-term injury.

Midfield: N’Golo Kante will no doubt keep his place in the middle of the park but I think we could see Conte decide to freshen it up alongside the French international.

Danny Drinkwater is pushing for a recall amid reports he’s unsettled due to a lack of first team football but I think Tiemoue Bakayoko will be the man to come in with Cesc Fabregas making way. Davide Zappacosta is lacking match fitness after a tendon injury so Victor Moses will most likely keep his place on the right wing while Marcos Alonso should see-off competition from Emerson Palmeiri on the left.

Attack: Alvaro Morata was disappointing during the draw with West Ham at Stamford Bridge so Conte may decide to give Olivier Giroud a chance to impress up front on Sunday.

No doubt Eden Hazard will keep his place despite his frustrating form of late but Pedro is pushing for a recall and he may replace Willian in attack if Conte wants to freshen things up. 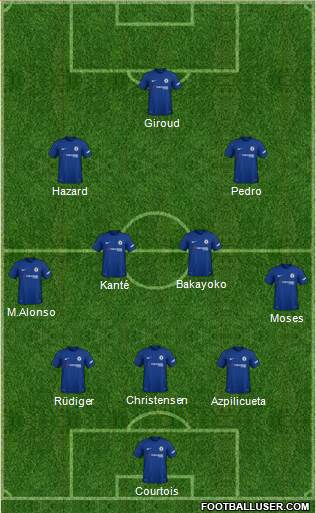