Chelsea star Eden Hazard has made the cut but Liverpool dominate the WhoScored? Premier League Team of the Week with four representatives

Chelsea star Eden Hazard has made the cut but Liverpool dominate the WhoScored? Premier League Team of the Week.

Hazard scored a crucial equaliser as Chelsea came from two goals down to beat Southampton 3-2 at St Mary’s on Saturday afternoon and the Belgian superstar has made the TOTW thanks to a score of 8.3.

Manchester City wrapped-up the title with an impressive 3-1 victory at Tottenham and Raheem Sterling makes the TOTW after his goal-scoring display at Wembley earned him a score of 8.3.

However, it’s Liverpool who dominate the side as Jurgen Klopp’s men have four players in the Team of the Week following their 3-0 victory over Bournemouth at Anfield.

Trent Alexander-Arnold continued to impress with another excellent display at right-back and he makes the cut with a score of 8.4 while Alex Oxlade-Chamberlain put in another superb midfield performance to also make it in to the eleven.

Sadio Mane got himself on the scoresheet as he opened the scoring against Bournemouth and the Senegal attacker is named in the TOTW with a rating of 7.9 while team mate Roberto Firmino’s score of 8.8 was also enough to see him make the line-up.

There was no place for Premier League top scorer Mo Salah despite him registering his 40th goal of the campaign as Crystal Palace forward Wilfried Zaha edged him out thanks to a score of 9.0 – which was the highest of any player this weekend.

Here is the full WhoScored? Premier League Team of the Week: 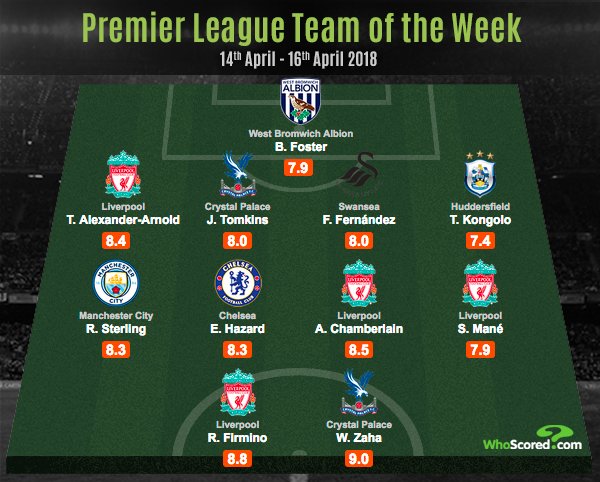