Arsenal To Steal March On Liverpool With £52.3m Bid For French Star

Arsenal are ready to steal a march on Liverpool by tabling an opening £52.3m bid to sign Paris Saint-Germain midfielder Adrien Rabiot

The transfer window may be closed but managers are working hard on their plans for the summer so we’ll bring you all the latest gossip from around the globe. Today, Arsenal step-up their interest in Adrien Rabiot… 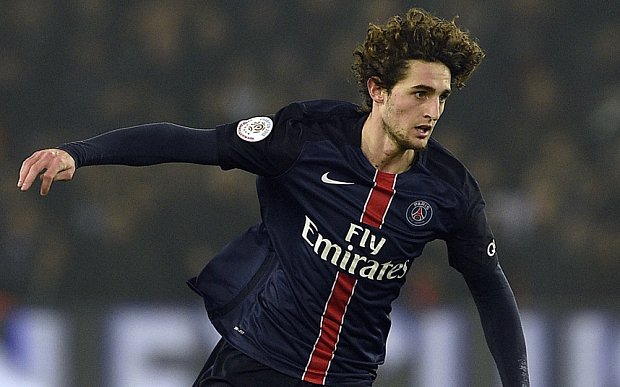 Arsenal are ready to steal a march on Liverpool by tabling an opening £52.3m bid to sign Paris Saint-Germain midfielder Adrien Rabiot, according to a report by TeamTalk.

Rabiot joined PSG’s youth system in 2010 and has developed in to one of the most highly-rated young midfielders in Europe since forcing his way in to the first team set-up in 2012.

The 23-year-old has established himself as a first team regular this season and he’s made 44 appearances in all competitions so far this campaign to help PSG wrap-up yet another Ligue 1 title.

However, Rabiot’s long-term future at the Parc des Princes is in serious doubt as he’s approaching the final year of his contract and has so far refused to sign an extension with the French champions.

Rabiot has done little to play down the speculation as he admitted at the weekend that he doesn’t know if he’ll still be at PSG at the start of next season.

When asked if he’ll be a PSG player next year, Rabiot is quoted by TeamTalk as saying:

“I don’t know, we will see. But, for now, I want to enjoy every moment and every trophy with my club.”

The situation has alerted clubs here in the Premier League as TeamTalk claim that Arsenal and Liverpool are among the teams to have expressed their interest in signing the midfielder this summer.

Jurgen Klopp is in the market for another central midfielder as Emre Can is expected to walk away from the Anfield giants on a free transfer when his contract expires and it seems Rabiot has been lined-up as a potential replacement.

However, Arsenal are ready to steal a march on their rivals as TeamTalk are citing a report from Tuttosport that claims the Gunners are set to submit an opening £52.3m [€60m] offer for Rabiot’s signature.

Arsene Wenger is expected to sign at least one new centre-midfielder this summer as the futures of Jack Wilshere and Aaron Ramsey are in doubt while Santi Cazorla is unlikely to play for the club again due to a long-term injury.

It looks like the Gunners boss is finally ready to formalise his interest in Rabiot having tacked him for some time but the report says Arsenal will also face competition from Juventus as the Old Lady look to strengthen their midfield options this summer.

It’s going to be interesting to see how things develop over the coming weeks but I think Rabiot would be an excellent signing for Arsenal, or indeed Liverpool, if either club could lure him to England.