Chelsea will be look to keep the pressure on Tottenham when they take on Burnley at Turf Moor on Thursday. Here is the side we think Antonio Conte will pick

Chelsea will be look to keep the pressure on Tottenham with a win when they take on Burnley at Turf Moor on Thursday evening.

Goalkeeper: Thibaut Courtois is almost certain to keep his place between the sticks tomorrow night with Willy Caballero among the substitutes.

Defence: Antonio Rudiger is in line for a recall after being dropped for the comeback win over Southampton at the weekend with Conte insisting his absence was strictly tactical.

Cesar Azpilicueta could be the man to make way as he may be rested ahead of Sunday’s FA Cup semi-final showdown with the Saints at Wembley.

David Luiz and Ethan Ampadu are still injured so Gary Cahill and Andreas Christensen should keep their places in the back three tomorrow.

Midfield: Danny Drinkwater is a major doubt due to a groin injury but Tiemoue Bakayoko is pushing for a recall in midfield after being left out in recent weeks.

Cesc Fabregas is likely to drop out with the Spanish international rested ahead of the FA Cup semi-final so Bakayoko could partner N’Golo Kante in the middle of the park tomorrow night.

Davide Zappacosta got a run-out against Southampton at the weekend so Victor Moses could be recalled against Burnley while Conte has confirmed Emerson Palmeiri will make his full league debut with Marcos Alonso left out as he faces a three-game suspension.

Attack: Olivier Giroud is expected to be handed a start up front after coming off the bench to score twice during the dramatic comeback win at St Mary’s on Saturday afternoon. Alvaro Morata will therefore drop to the bench while Pedro could replace Willian in attack.

Conte may be tempted to rest Eden Hazard but this is an important game if Chelsea want to retain any hope of finishing in the top four so I think the Belgian international will start. 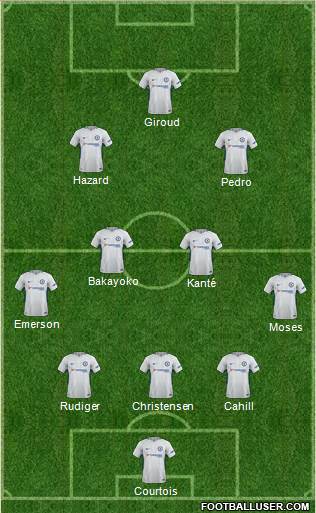