Jose Mourinho has become the latest manager to respond to the news that Arsene Wenger has decided to leave Arsenal at the end of the season. 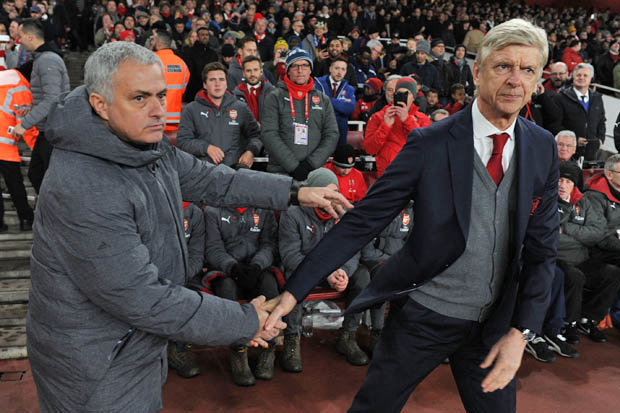 Jose Mourinho has become the latest manager to respond to the news that Arsene Wenger has decided to leave Arsenal at the end of the season.

Wenger made the surprise announcement on Friday morning that he will end his tenure as Arsenal manager after almost 22 years in charge of the north Londoners.

The Gunners are set to finish outside the top four for the second consecutive season and while they are through to the semi-finals of the Europa League, a growing number of fans have been calling for change.

We’ve seen thousands of empty seats at the Emirates in recent home games and it seems the mounting pressure has convinced Wenger it’s the right time to walk away from the club.

Mourinho and Wenger have always had a frosty relationship with the two involved in a number of heated exchanges over the years but the United boss insists he has always had respect for his managerial counterpart.

The Portuguese coach says he is happy Wenger is now going to take the next chapter in his career and claims only ‘true football people’ will understand the relationship the two managers had.

Speaking ahead of United’s FA Cup semi-final with Tottenham, Mourinho is quoted as saying by the Telegraph.

“If he’s happy with the decision he makes and looks forward to the next chapter of his career and his life I’m really happy for him. If he’s sad, I’m sad. I’m pretty sure as a club – and especially because Mr Wenger and Arsenal were for many, many years the biggest rivals of Sir Alex [Ferguson’s] era – we will show Mr Wenger the respect he deserves.”

“It’s not about regretting. I think your question is a typical question from somebody that was not a manager, not a player. Of course, you don’t know the way we respect each other even when sometimes it doesn’t look like we don’t.

“Players that get yellow cards and red cards by aggressive actions against each other, bad words during the career – the manager is the same thing. The ones that respect each other more are the ones with the problems. It’s power against power; ambition against ambition; quality against quality. But in the end it’s people from the same business who respect one another’s careers.

“So it happened. What matters for me is the way I respect the person, the professional, the career. I always say that for some the memories are short, but for us football people – the real football people, the others live on us – don’t have short memories. I know what it means, three Premier League titles and seven FA Cups, what he did in Japan and France, what he brought to French football.

“[Also] What he gave to Arsenal in the period without Premier Leagues, the transition from stadium to stadium, we know what he did. If he’s happy with the decision, I’m really happy and I hope he doesn’t retire from football.”

It’s going to be interesting to see what Wenger decides to do in the summer but no doubt he’ll still have plenty of offers if he wants another challenge. The focus for Arsenal must now be to find the right man to drive the club forward next season.