Jurgen Klopp has offered an update on Alex Oxlade-Chamberlain after the midfielder picked up an injury during Liverpool’s Champions League win over Roma. 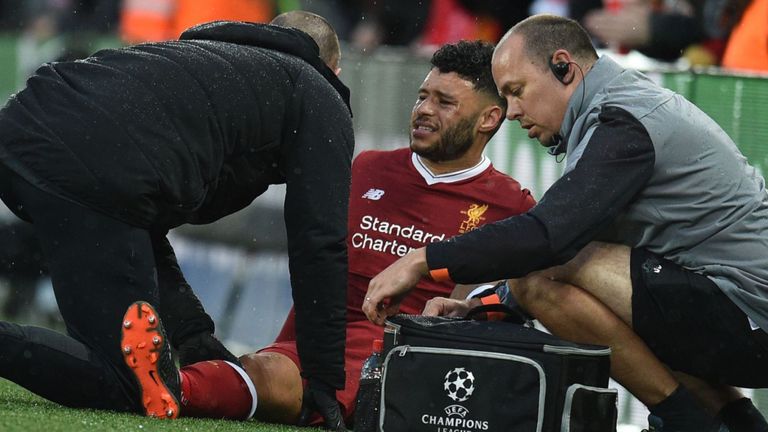 Jurgen Klopp has offered an update on Alex Oxlade-Chamberlain after the midfielder picked up an injury during Liverpool’s stunning Champions League win over AS Roma.

Oxlade-Chamberlain has been in fine form in recent months and was picked to start in midfield during Liverpool’s crucial semi-final first leg at Anfield on Tuesday night.

However, the 24-year-old required lengthy treatment from the Liverpool medical team after suffering a knee injury while tackling Aleksandar Kolarov in the 18th minute.

The former Arsenal star hobbled off and was given further attention on the touchline but it was eventually decided he couldn’t continue and Oxlade-Chamberlain was stretchered back to the dressing room and replaced by Georginio Wijnaldum.

Speaking after the game, Klopp has confirmed the early signs don’t look good and the medical department fear Oxlade-Chamberlain’s season could now be over.

The midfielder will now undergo a scan to determine the full extent of the injury but with less than a month left before the end of the campaign it looks unlikely Oxlade-Chamberlain will play again this season.

Whether Oxlade-Chamberlain’s season could be over…

It looks like this, unfortunately. We don’t know it exactly but if the medical department is quite concerned without a scan then you can imagine it is difficult. The season is not that long anymore, so it doesn’t look good. I am a very positive person and still hope that he only feels bad and is not that bad, but we will see that. I see in your faces, maybe you are a little bit surprised I am not flying, mood-wise. It’s just we lost a fantastic player tonight and that is not good news, so I am not really in the mood to talk about specific, fantastic things.

Obviously it will be a big blow to Liverpool if The Ox is ruled out for the rest of the season but if a serious knee injury is confirmed then the player is highly unlikely to make the World Cup.

Oxlade-Chamberlain looked certain to be included in the England squad for the finals in Russia but his place is now in serious doubt with Gareth Southgate set to name his provisional squad by May 14th.

Liverpool were able to recover from the early loss of Oxlade-Chamberlain to thrash Roma 5-2 last night to put one foot in the Champions League final with Mohamed Salah and Roberto Firmino both scoring twice.