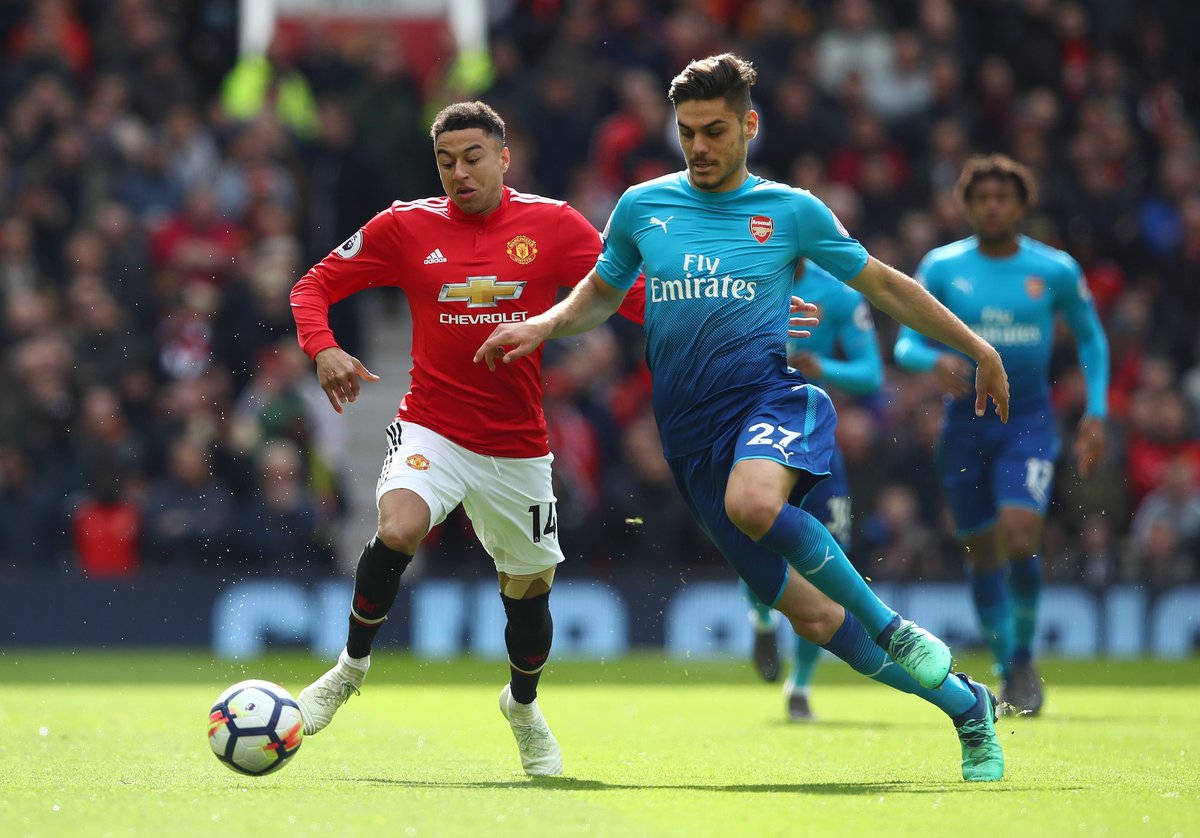 Arsenal fans have been praising the performance of Konstantinos Mavropanos after he made an impressive debut during their 2-1 defeat to Manchester United this afternoon.

Mavropanos joined Arsenal from PAS Giannina during the January transfer window and has been impressing coaches with his performances for the Under-23 development side in recent months.

The 20-year-old has been regularly training with the first team and was surprisingly called-up by Wenger for Arsenal trip to Old Trafford this afternoon.

With the Gunners resting Laurent Koscielny and Shkodran Mustafi ahead of their Europa League semi-final second leg with Atletico Madrid, it was assumed Rob Holding would start against United.

However, Wenger sprang another surprise by handing Mavropanos his full debut as the young Greek Under-21 international lined-up alongside Calum Chambers in what was a youthful Arsenal side.

The defender certainly wasn’t overawed by the occasion as he put-in an excellent performance with Mavropanos more than holding his own against the likes of Romelu Lukaku and Alexis Sanchez.

The Arsenal fans liked what they saw as they’ve been praising the young defender on Twitter with some even suggesting he’s done enough to displace Shkodran Mustafi from the starting eleven on a permanent basis.

I doubt Wenger is ready to risk Mavropanos against Madrid, despite his impressive display today, but the youngster certainly looks to have a bright future ahead of him.

Here’s what the Arsenal fans have been saying about Mavropanos:

Mavropanos will start ahead of Mustafi on Thursday imo.

Mavropanos having a great game. Surprisingly good on the ball too

Mavropanos loving life out there. Not overawed at all. So calm with the ball at his feet. Both he and Chambers have been very good.

Mavropanos deserves a huge amount of credit for putting in such a composed performance after being thrown in at the deep end.

Mavropanos has been so calm and collected today, played out from the back almost every time.

Never like to see young players lauded after just 65 mins of a first team game, saying that I think Mavropanos is quite possibly the greatest CB I've seen since Fabio Cannavaro..

What a debut performance from Mavropanos. Zero first team minutes played since January, thrown in at the deep end against a United team full of confidence off a semi-final victory and didn’t look remotely out of his depth. Hopefully a sign of what’s to come.

Mavropanos should be made third centre back after the summer, if he has a good preseason and Mustafi leaves he should be in contention for the starter place. Looked solid today.

Mavropanos is seriously impressive so far.

Massive performance from Mavropanos as well. Shows his character that he makes his debut at Old Trafford and performs that well. Maitland-Niles another one. Fantastic desire to play.