Liverpool take on AS Roma at the Stadio Olimpico on Wednesday night. Here is the side I think Jurgen Klopp will select for the game:

Liverpool will be looking to finish the job and secure their place in the Champions League final when they take on AS Roma at the Stadio Olimpico on Wednesday night.

Defence: We should see some changes in defence as Klopp is likely to recall Dejan Lovren to the back four after he was rested for the 0-0 draw with Stoke City at the weekend.

Ragnar Klavan will be the man to make way with Virgil van Dijk certain to retain his place in the middle of defence while Andrew Robertson is set to come back in for Alberto Moreno at left-back.

Joe Gomez has been ruled out with an ankle injury but Trent Alexander-Arnold is expected to be fit after recovering from a dead leg so he’ll return to right-back following his stint in midfield against Stoke.

Midfield: Klopp has very few options to rotate in midfield with injuries mounting in the middle of the park as Alex Oxlade-Chamberlain and Emre Can are once again unavailable for selection.

Adam Lallana has travelled to Italy but only to train with the first team as he’s still working his way back from a hamstring injury so we should see James Milner recalled alongside Jordan Henderson and Georgino Wijnaldum in midfield.

New Customers can get Liverpool at an enhanced 25/1 to qualify for the final. Max Stake £1. Winnings paid in free bets. Full T&Cs Apply. 18+|Gamble Aware.

Attack: Sadio Mane wasn’t risked against Stoke at the weekend due to a minor muscle problem but the Senegalese international is set for recall on Wednesday night.

Mohamed Salah and Roberto Firmino both came through the game against Stoke unscathed so they’ll start up front alongside Mane in what’s been one of the most prolific attacks in Europe this season.

Dominic Solanke and Danny Ings will provide Klopp with attacking options from the bench if needed. 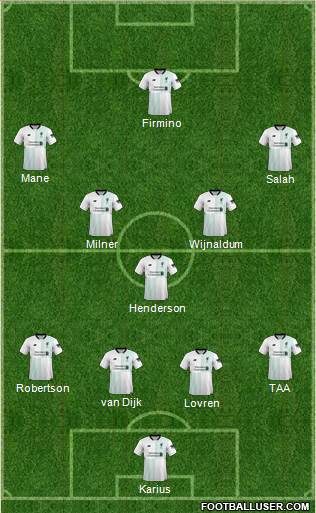