Arsenal are looking to book their place in the Europa League final when we take on Atletico Madrid this evening. Here is the side I think Wenger will select

Arsenal are looking to book their place in the Europa League final when we take on Atletico Madrid in the crucial second leg at the Wanda Metropolitano this evening.

Goalkeeper: David Ospina has recovered from a minor rib problem and Wenger has confirmed the Colombian international will keep his place in goal ahead of Petr Cech.

Defence: We should see changes in defence as the boss rested Laurent Koscileny, Shkodran Mustafi and Nacho Monreal for the 2-1 defeat to Manchester United at the weekend.

Kostantinos Mavropanos made an impressive debut in the middle of defence alongside Calum Chambers but I still think we’ll see the more experienced Koscielny and Mustafi recalled for this huge game – despite their questionable form of late.

Sead Kolasinac has recovered after limping off with an ankle injury at the weekend but Monreal is still expected to start at left-back while Hector Bellerin will once again start on the right.

Midfield: Ainsley Maitland-Niles showed he has a big future as a central midfielder with an excellent display against United but I think we’ll still see him drop to the bench tonight.

Granit Xhaka will no doubt keep his place while Jack Wilshere and Aaron Ramsey are due to be recalled after being rested for the trip to Old Trafford on Sunday.

Mohamed Elneny is making good progress with his recovery from an ankle injury that he picked up a couple of weeks ago but this game will come too soon for the Egyptian.

Attack: Pierre-Emerick Aubameyang is ineligible so Alexandre Lacazette will lead the line up front and he should be in confident mood as he’s been in fine form lately. Laca was probably our best player in the first leg and we’ll need another top class performance from him this evening.

Mesut Ozil was rested against United so let’s hope he’s fully refreshed as we desperately need a star performance from our German super-star.

Henrikh Mkhitaryan limped out of the game at the weekend with a knee problem but he was in full training yesterday and is expected to be fit to start in attack. The Armenian international looked sharp against United and got himself a fine goal so he should be in confident mood this evening.

Alex Iwobi and Danny Welbeck will provide the attacking options from the bench while youngsters Eddie Nketiah and Reiss Nelson may also be among the subs. 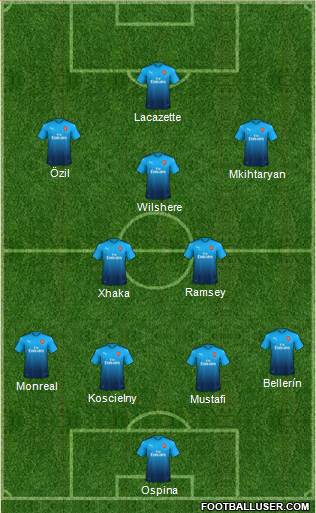