Tottenham take on West Brom at the Hawthorns on Saturday afternoon. Here is the side we think Mauricio Pochettino will select for the game:

Tottenham will be looking to cement their position in the top four when they take on West Brom at the Hawthorns on Saturday afternoon.

Goalkeeper: Hugo Lloris impressed during the win over Watford last weekend so he’ll no doubt keep his place ahead of Michel Vorm.

Defence: Toby Alderweireld is pushing for a recall but Davinson Sanchez is now firmly ahead of him in the pecking order so I think we’ll see the Colombian international starting once again.

Jan Vertonghen will keep his place in the middle of defence after enjoying an excellent campaign but we could see Serge Aurier coming in for Kieran Trippier at right-back.

Danny Rose has recovered from a calf injury but I’m not sure he’ll be fit enough to start just yet so Ben Davies should once again start at left-back tomorrow.

Midfield: Mousa Dembele is a major doubt with an ankle injury and I don’t think Pochettino will take any risks with him so Victor Wanyama could get a recall alongside Eric Dier against West Brom.

Moussa Sissoko will be an option from the bench but Harry Winks isn’t expected to feature again this season due to an on-going ankle problem.

Attack: Harry Kane will be desperate to get himself on the score-sheet again as he looks to try and catch Mohamed Salah in the race for the Golden Boot so no doubt he’ll start up front.

Christian Eriksen and Dele Alli are expected to keep their places in attack but we might see Pochettino mix things up on the right side with Heung-min Son making way.

Lucas Moura will be hoping to feature but I think Erik Lamela could be the man to get a recall tomorrow afternoon. 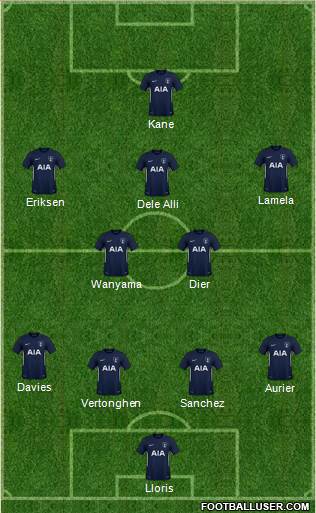