Arsene Wenger takes his Arsenal side to the King Power to take on Leicester on Wednesday night. Here is the side I think Wenger will select for the game:

Arsene Wenger will take charge of his penultimate game when he takes his Arsenal side to the King Power to face Leicester on Wednesday night.

Goalkeeper: Petr Cech kept goal for the 5-0 win over Burnley on Sunday and he’s expected to keep his place tomorrow night as David Ospina is carrying a knock.

Defence: Laurent Koscielny has been ruled out for up to six months after undergoing surgery on a ruptured Achilles injury but Shkodran Mustafi is pushing for a recall in defence.

Kostantinos Mavropanos impressed again at the weekend but I don’t think Wenger will make him play another Premier League games just 3 days later so Calum Chambers is the man most likely to keep his place.

Hector Bellerin will probably start once again at right-back but Nacho Monreal is pushing for a recall at left-back with Sead Kolasinac dropping out despite scoring a fine goal on Sunday.

Midfield: Ainsley Maitland-Niles could come back in to the midfield after being left out on Sunday following his impressive performance during the defeat to Man Utd last weekend.

Attack: Pierre-Emerick Aubameyang showed his goal-scoring instincts with another brace at the weekend so hopefully he keeps his place up front as I’d like to see him build on his goal tally.

Alexandre Lacazette may be given a breather after starting both games recently so Danny Welbeck is likely to be recalled in attack after coming off the bench against Burnley.

Mesut Ozil has once again been ruled out with Wenger insisting the playmaker has a genuine back injury amid claims he’s picking and choosing which games he plays but Henrikh Mkhitaryan is expected to keep his place in attack after an excellent display at the weekend. 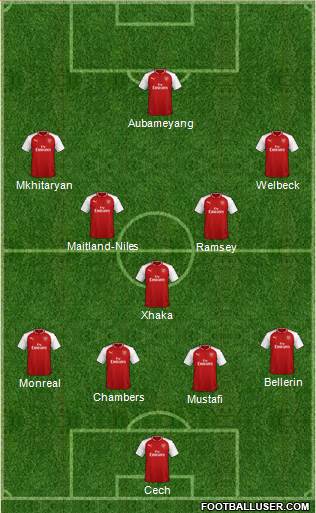