Chelsea will be looking for a win when Huddersfield arrive at Stamford Bridge on Wednesday night. Here is the side we think Conte will pick

Chelsea will be looking to keep the pressure on Tottenham and Liverpool with a win when Huddersfield arrive at Stamford Bridge on Wednesday night.

Goalkeeper: Thibaut Courtois is almost certain to keep his place between the sticks ahead of Willy Caballero.

Defence: Andreas Christensen is pushing for a recall after being left out of the starting eleven in recent games and Conte may be tempted to bring him back in against Huddersfield tomorrow.

Gary Cahill is the man most likely to make way in the middle of defence as Cesar Azpilicueta and Antonio Rudiger have been performing superbly over the past few weeks.

Midfield: We could see Conte freshen things up in midfield with Emerson Palmeiri coming in for Marcos Alonso in the left wing-back position while Davide Zappacosta is also pushing for a recall on the right so Victor Moses could make way.

Conte knows they need to win this game so he may opt to play only two central midfielders to give himself an extra attacker to support the striker.

If so, then Cesc Fabregas may be given a breather as Tiemoue Bakayoko has finally been showing his true potential in recent games so the Frenchman may keep his place alongside N’Golo Kante.

Attack: Olivier Giroud has been excellent recently but he may be given a rest to keep him fresh ahead of the season finale and Alvaro Morata has been passed fit to return after missing the win over Liverpool with a minor knock.

If Conte does go with two attackers behind Morata then Willian is favourite ahead of Pedro to get the nod alongside Eden Hazard – who was excellent against Liverpool on Sunday. 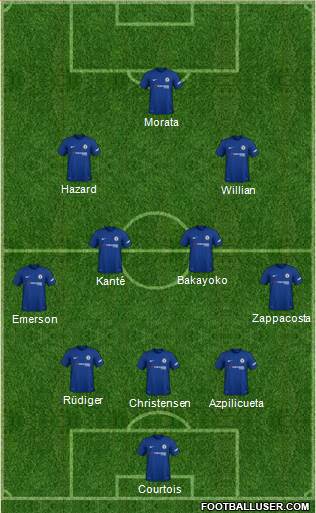