Chelsea were held to a 1-1 draw by Huddersfield at Stamford Bridge meaning the Terriers have secured their to flight status. Watch the goals 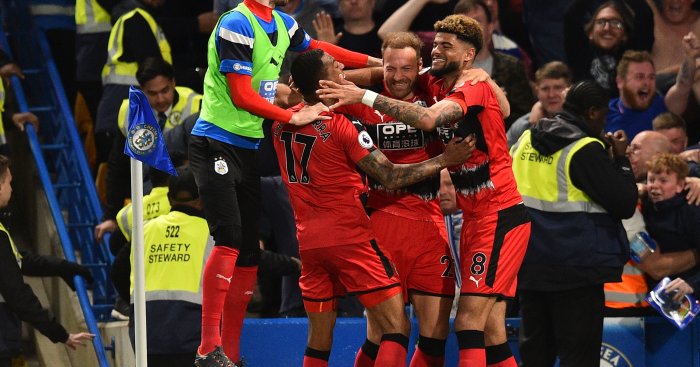 Chelsea’s chances of snatching fourth place have been dented after they were held to a 1-1 draw by Huddersfield at Stamford Bridge meaning the Terriers have secured their to flight status.

The hosts wasted a golden early chance to break the deadlock when Antonio Rudiger somehow managed to miss an open goal as he blazed his shot wide from two yards out.

Chelsea continued to dominate but it was Huddersfield who grabbed the opening goal in the 50th minute as Depoitre latched on to Mooy’s lofted ball and turned it home at the second attempt after Caballero had messed up his attempted clearance.

However, Antonio Conte’s men levelled things up midway through the second half when Marcos Alonso headed home to make it 1-1 in the 62nd minute.

Chelsea pushed to find the winner they needed to remain in the hunt for a top four place but Huddersfield held on to claim the point they needed to secure their top flight status for another year.

With Tottenham beating Newcastle at Wembley, it means Chelsea now have to pray Liverpool lose at home to Brighton and they win away at Newcastle to snatch fourth place on the final day of the season.