Manchester United visit the London Stadium to face West Ham this evening. Here is the team I think Jose Mourinho will pick for the game:

Manchester United will play their penultimate Premier League game of the season when they visit the London Stadium to face West Ham this evening.

Goalkeeper: Sergio Romero could get a run-out after returning to fitness but I think we’ll see David De Gea keeping his place between the sticks tonight.

Defence: Mourinho is expected to make changes to the back four with Antonio Valencia set to return after being rested for the defeat at Brighton last time out so Matteo Darmian will make way.

Phil Jones is back in contention after recovering from a minor knock but Eric Bailly and Victor Lindelof could get recalled in the middle of defence with Chris Smalling and Marcos Rojo dropping out.

Luke Shaw is pushing for a recall at left-back but I think we’ll see Ashley Young keeping his place once again.

Midfield: Nemanja Matic hasn’t travelled to the capital so it looks like he’s been given a breather but Marouane Fellaini has been ruled out after picking up a knock at Brighton.

Ander Herrera should get a recall in midfield after being on the bench last time out while Scott McTominay could get a chance to impress with Paul Pogba deployed in a more advanced role.

Attack: Alexis Sanchez missed the defeat to Brighton with a minor injury but he’s back in contention and should get a recall in attack while Jesse Lingard is also expected to come back into the side.

Mourinho appeared to take aim at the likes of Anthony Martial and Marcus Rashford following disappointing performances at the Amex Stadium so it will be interesting to see if either player is involved tonight.

However, Romelu Lukaku has once again been ruled out with an ankle injury so Mourinho will have to fill the void somehow and I think Rashford is the man most likely to start up front. 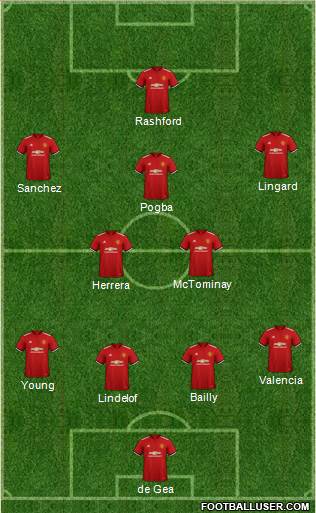