Chelsea take on Newcastle at St James’ Park on Sunday afternoon. Here is the side we think Antonio Conte will pick for the game:

Chelsea simply have to win to stand any chance of snatching fourth place on the final day of the season when they take on Newcastle at St James’ Park on Sunday afternoon.

Goalkeeper: Thibaut Courtois is back in contention after recovering from a minor knock that kept him out of the Huddersfield game in weekend so Willy Caballero is set to make way following his error during the 1-1 draw.

Defence: Gary Cahill is pushing for a recall after being rested on Wednesday night so Andreas Christensen is the man most likely to make way as Cahill had been impressing in the middle of defence recently.

Cesar Azpilicueta is almost certain to retain his place on the right-side of the back three while Antonio Rudiger should also keep his place despite missing a sitter against Huddersfield in midweek.

Midfield: We could see Conte starting the game with three central midfielders so Tiemoue Bakayoko could be recalled alongside N’Golo Kante and Cesc Fabregas in the middle of the park.

Marcos Alonso should start in the left wing-back position after scoring the equaliser against the Terriers but Victor Moses may come back in to the side with Davide Zappacosta making way.

Attack: Eden Hazard was controversially named on the substitutes bench for the crucial game against Huddersfield and Conte may regret leaving his star man out of the team.

The Belgian international is therefore expected to be recalled on Sunday and Willian and Pedro could both drop to the bench if Conte opts to play one attacking midfielder behind the striker.

Alvaro Morata disappointed in midweek so I think we’ll see the Spaniard make way with Olivier Giroud getting a recall to lead the line up front. 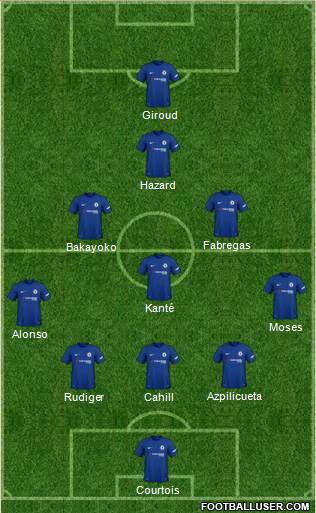