Arsene Wenger will take charge of his final game as Arsenal manager when we take on Huddersfield on Sunday. Here is the side I think Wenger will select

Arsene Wenger will take charge of his final game as Arsenal manager when we take on Huddersfield Town at the John Smiths Stadium on Sunday afternoon.

Goalkeeper: Petr Cech is expected to keep his place in goal for Wenger’s final match with David Ospina on the bench.

Defence: Laurent Koscielny is obviously out as he’s facing around six months on the sidelines after undergoing surgery on an Achilles injury but Shkodran Mustafi is pushing for a recall in defence.

Kostantinos Mavropanos is suspended after being sent off against Leicester City while Calum Chambers could come back in to replace Rob Holding in the middle of the back four.

Hector Bellerin was given a well-deserved breather in midweek but I expect him to be recalled in place of Ainsley Maitland-Niles at right-back while Nacho Monreal should come in for Sead Kolasinac.

Midfield: Jack Wilshere could return to the squad after missing the defeat at the King Power on Wednesday night to attend the birth of his newborn baby.

Wilshere could replace Alex Iwobi in midfield and start alongside Aaron Ramsey and Granit Xhaka – who’ll be looking to end the season on a positive note after a tough night at Leicester.

Attack: Pierre-Emerick Aubameyang showed his goal-scoring instincts with another goal last time out so hopefully he’ll be given another chance to add to his goal tally tomorrow.

Alexandre Lacazette was given a rest against Leicester but I expect the Frenchman to be recalled to lead the line up front at Huddersfield with Auba offering support from the left.

Mesut Ozil has once again been ruled out with a supposed back injury so Henrikh Mkhitaryan should keep his place in attack and the Armenian international has been a good form lately.

Danny Welbeck will probably drop to the bench where he’ll be joined by the likes of Alex Iwobi, Reiss Nelson and Eddie Nketiah. 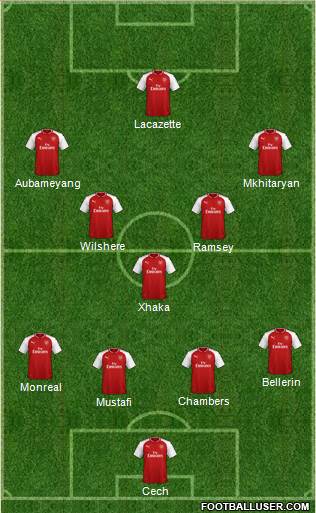