Transfer news: Liverpool are linked with a shock swoop for a £52m Spaniard while Tottenham have opened talks with sign a £12m attacker.

The summer transfer window is about to open and managers are working hard on their transfer targets so we’ll bring you all the latest gossip from around the globe. Today, Liverpool are linked with Alex Grimaldo and Spurs are in talks to sign Xherdan Shaqiri…

First up and according to a report by TeamTalk, Liverpool are eyeing a surprise move to sign Benfica defender Alex Grimaldo as Jurgen Klopp looks to strengthen his squad this summer.

The Reds have enjoyed an excellent campaign which could yet end with lifting the Champions League trophy but Klopp knows he still needs to add to his ranks if they’re to compete on all fronts next season.

A new left-back could be on the agenda as Alberto Moreno’s future at Anfield is in doubt having lost his place so fresh competition for Andrew Robertson will be needed if the Spaniard leaves.

TeamTalk are citing a report which originates from A Bola that claims Liverpool are considering a swoop for Grimaldo after having the left-back scouted throughout this season.

The Spanish U21 international has been in excellent form for Benfica since joining the club from Barcelona two years ago and he has a whopping buyout clause worth around £52m in his contract.

However, the report says Liverpool could test the water with a lower bid to gauge Benfica’s position because Klopp is unlikely to spend that kind of money on the 22-year-old – who’ll be nothing more than a back-up if he does join the Merseysiders. 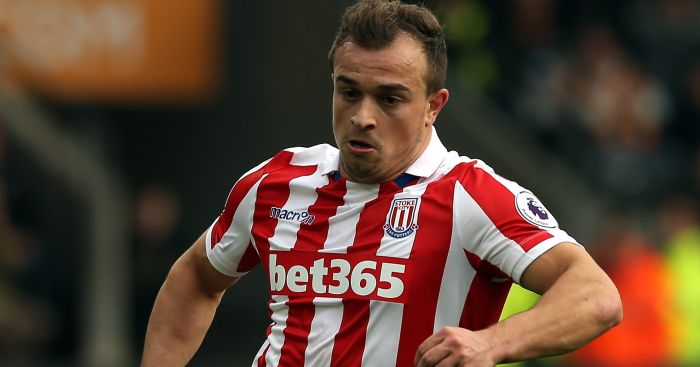 Sticking with TeamTalk and they carry an exclusive claiming that Tottenham are in talks with Stoke about the possible signing of £12m attacker Xherdan Shaqiri this summer.

Mauricio Pochettino is needing to further strengthen his squad this summer after qualifying for the Champions League for the third consecutive season and it looks like he wants to add another attacker to his side.

The Spurs boss has seemingly renewed his interest in Shaqiri as TeamTalk claim Tottenham have lodged another enquiry to sign the 26-year-old having seen an approach knocked back in January.

However, Stoke have little option but to sell this time around as the report says Shaqiri has clause in his contract allowing him to leave for just £12m following their relegation to the Championship.

The Swiss international netted 8 times in the league last season and TeamTalk claim the likes of Everton, West Ham and Crystal Palace are also showing a keen interest but it’s Spurs who’re leading the chase.

We’ll have to wait and see how things develop but £12m would be a bargain for a player of Shaqiri’s quality in today’s market so I think he’d be an excellent signing for the North Londoners.