Liverpool are being tipped to launch big-money moves for Luiz Suarez, Alisson Becker and Ousmane Dembele that would set them back £220m this summer

The summer transfer window is about to open and managers are working hard on their transfer targets so we’ll bring you all the latest gossip from around the globe. Today, Liverpool are linked with three big-money signings….

Liverpool are being tipped to launch big-money moves for Luiz Suarez, Alisson Becker and Ousmane Dembele that would set them back £220m this summer, according to various reports in Spain via TeamTalk.

The Reds could yet end the season as European champions but Jurgen Klopp knows he still needs to further strengthen his squad if they’re to compete on all fronts next season.

A new forward to offer support to Roberto Firmino is likely to be a priority and TeamTalk are citing a report from Don Balon that claims Liverpool are lining-up an ambitious move to re-sign Suarez.

The Uruguayan international was outstanding during his time at Anfield before joining Barcelona and he’s continued to forge a reputation as one of the top marksmen in the world after scoring 151 goals in 195 games for the Catalan giants.

However, Suarez’s future at the Nou Camp is in doubt as speculation suggests Barca will cash-in if they sign Antoine Griezmann and the report says Liverpool are hoping to pull-off a shock £50m swoop.

Klopp is also being tipped to sign a new goalkeeper as Simon Mignolet is expected to leave after falling out of favour and the Spanish publication, via TeamTalk, are also claiming that Liverpool are targetting a £70m move for Alisson.

The Brazilian stopper has starred for Roma this season, leading them to the semi-finals of the Champions League, and his performances have reportedly caught the attention of Klopp and his scouting team.

The report says Liverpool have been handed a major boost in their pursuit of Alisson as Real Madrid have pulled out of the race in order to concentrate their efforts on signing Chelsea’s Thibaut Courtois. 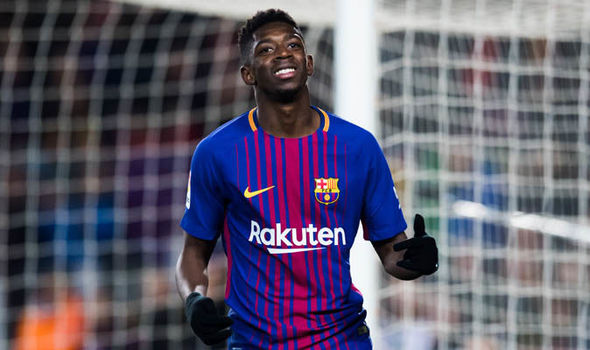 Finally, the Merseysiders are being tipped to bring in competition for Sadio Mane and Mohamed Salah next season and TeamTalk are carrying a report from El Gol Digital that claims a £100m move for Dembele is on the cards.

The French international winger endured a disappointing debut season at the Nou Camp following his big-money move from Borussia Dortmund last summer with injuries hampering his progress and he’s been linked with a move away.

The Spanish publication says Barca are ready to do business with Liverpool over a £100m deal meaning the Reds would need to spend £220m to pull off what would be a sensational triple swoop.

However, before Liverpool fans get too excited, I think it’s highly unlikely the La Liga champions will agree to sell both Dembele and Suarez in the same summer and deals for any of the trio appear a long way off right now.