Chelsea take on Manchester United in the FA Cup final at Wembley on Saturday evening. Here is the side we think Antonio Conte will pick for the game:

Chelsea will look to end a disappointing season with a piece of silverware when they take on Manchester United in the FA Cup final at Wembley on Saturday evening.

Goalkeeper: Willy Caballero has played in every round of the competition so far but Conte is being tipped to recall Thibaut Courtois for the final. It would be harsh on Caballero but a win could save Conte his job so he needs to make the tough call.

Defence: Gary Cahill has been back in favour in recent weeks and Chelsea have looked more solid with him in the middle of defence lately.

Andreas Christensen was recalled last week but Chelsea were all over the place during the 3-0 defeat to Newcastle so it will be interesting to see what Conte does on Saturday.

Cesar Azpilicueta is certain to keep his place but I think we might see Cahill in the middle and Antonio Rudiger on the left of the back three with Christensen the man to miss out.

Midfield: We could see Conte starting the game with three central midfielders in order to keep things tight as that’s the formation Chelsea have deployed in the big games recently.

Ross Barkley showed glimpses of his quality against Newcastle but I think he’s certain to drop to the bench with Cesc Fabregas recalled alongside Tiemoue Bakayoko and N’Golo Kante in the middle of the park.

Victor Moses will keep his place on the right but we should see Marcos Alonso getting a recall on the opposite flank after Emerson Palmeiri started at St James’ Park.

Attack: If Conte does go with three in midfield it means he’ll be restricted to having just one attacking midfielder supporting the striker against United this weekend.

Willian has been one of Chelsea’s most consistent players this season while Pedro will also be pushing for a start but I don’t think there is any doubt Eden Hazard will start on Saturday evening.

Alvaro Morata will also be hoping for a recall up front as he’s fallen out of favour again recently but Olivier Giroud has been in great form so I think the Frenchman will be given the nod in attack. 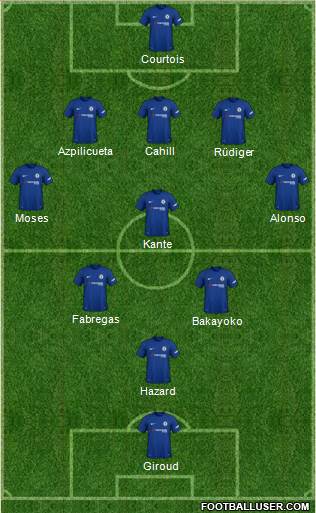