The summer transfer window is now open and managers are working hard on their transfer targets so we’ll bring you all the latest gossip from around the globe. Today, Arsenal are linked with Lucas Torreira… 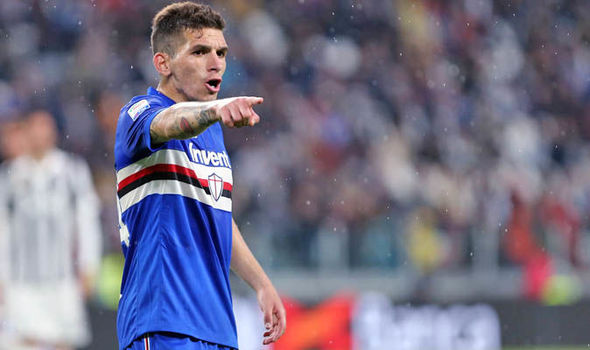 Arsenal have joined Liverpool in showing an interest in signing Sampdoria’s £22m-rated midfielder Lucas Torreira this summer, according to reports in Italy via the Sun.

Torreira came through the youth ranks at Pescara after joining the Italian Serie B club as a youngster and enjoyed two excellent seasons in their first team before joining Sampdoria in 2016.

The 22-year-old has impressed in the defensive midfield position at the Stadio Luigi Ferraris Stadium and he’s been named in the Uruguay squad ahead of this summers World Cup finals in Russia.

The South American has also caught the eye of several top European clubs with the Sun claiming that Liverpool, Everton, Juventus and Napoli have all expressed their interest in recent months.

Jurgen Klopp is busy trying to build on Liverpool’s success after reaching the Champions League final and midfield is an area he needs to strengthen – although it remains to be seen whether they’ll step-up their interest in Torreira after completing a deal to sign Fabinho.

However, if Liverpool are still in the race to sign the Sampdoria star then they’ll face fresh competition as the newspaper is citing a report from CalcioMercato that claims Arsenal are now eyeing Torreira.

New head coach Unai Emery is wasting no time putting his own stamp on the squad he inherited from Arsene Wenger and a new midfielder is desperately needed following Santi Cazorla’s exit from the club.

Jack Wilshere’s future is also in doubt as his contract is due to expire next month and he’s no closer to signing an extension so it seems Arsenal have identified Torreira as a possible target.

The report says the midfielder has a release clause worth £22m and the likes of Arsenal should have no problem in paying that kind of money in today’s market for a player of Torreira’s potential.