Arsenal are on the verge of signing Lucas Torreira in a £26.5m deal after agreeing personal terms over a 5-year contract with the Sampdoria midfielder

The summer transfer window is open and managers are working hard on their transfer targets so we’ll bring you all the latest gossip from around the globe. Today, Arsenal have now agreed terms with Lucas Torreira…

Arsenal are on the verge of signing Lucas Torreira in a £26.5m deal after agreeing personal terms over a 5-year contract with the Sampdoria midfielder, according to Gazzetta dello Sport.

We’ve been strongly linked with a move for the Uruguayan international in recent weeks as new head coach Unai Emery looks to bring in a defensive midfielder this summer. Granit Xhaka has played as our deepest midfielder for the past two seasons but his lack of defensive awareness has left the back four exposed at times.

With Santi Cazorla leaving the club following the expiration of his contract and Jack Wilshere also being tipped to leave after failing to sign a new deal, Arsenal have been on the look-out for a traditional defensive midfielder and Torreira has emerged as a leading target with widespread reports suggesting we’ve been in talks with Sampdoria.

The Daily Star reported yesterday that we had settled on a deal with the Serie A side after agreeing to pay £26.5m for Torreira’s signature and were discussing personal terms. The midfielders release clause is set at around £22m but we’ve seemingly agreed to pay a premium in order to pay the fee over several installments rather than one lump sum.

It looks like the deal is now on the verge of completion as Gazzetta dello Sport claim that terms were agreed with Torreira’s camp during a meeting on Tuesday afternoon and the South American is now set to sign a five-year contract with Arsenal ahead of his move to the Emirates. 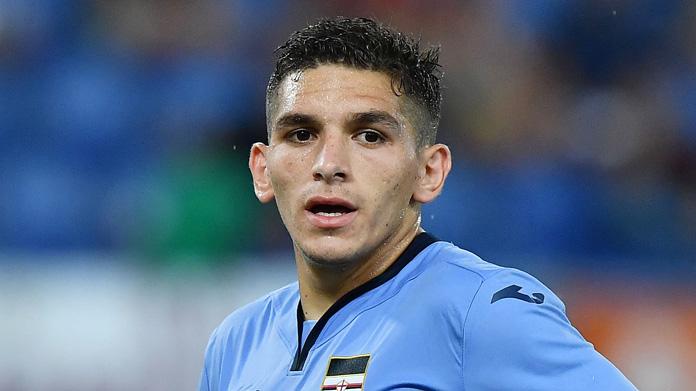 Several other media outlets are also running similar stories suggesting a deal is close and we’ve reportedly beaten-off competition from the likes of Napoli and Borussia Dortmund to land Torreira so it’s certainly something of a coup.

The 22-year-old has been one of the best defensive midfielders in Italian football since joining Sampdoria from Pescara in 2015 and while he’s only 5ft 6in tall, his tenacity and desire to win back the ball makes up for his lack of height. Torreira is also known to be an excellent passer, has a tireless work ethic and has a decent shot on him.

READ –> Arsenal could snap-up £53m attacker for nothing!

The midfielder has been named in Uruguay’s squad for the World Cup finals so Arsenal will need to move quickly to get this deal wrapped-up before their opener on Friday afternoon but I think he’ll be an excellent addition to the squad if we can get this transfer over the line.