The summer transfer window is open and managers are working hard on their transfer targets so we’ll bring you all the latest gossip from around the globe. Today, Man Utd are urged to sign Leonardo Bonucci…. 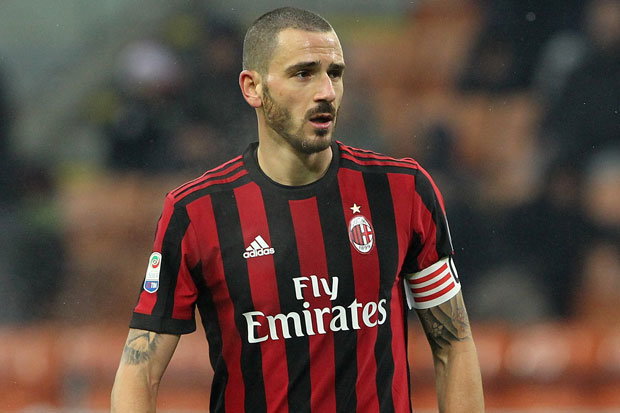 Jose Mourinho has urged his Manchester United bosses to wrap-up the signing of AC Milan defender Leonardo Bonucci before Chelsea attempt to hijack the deal, according to reports in Italy via the Metro.

Mourinho has already snapped up right-back Diogo Dalot from Porto while midfielder Fred has arrived from Shakhtar Donetsk but the United boss knows he needs to further strengthen his squad if they’re to compete with Manchester City for the title next season after finishing 19 points adrift of their rivals last year.

A new central defender is understood to be a priority as doubts remain over Chris Smalling and Phil Jones while Victor Lindelof is being linked with a move away from Old Trafford after a disappointing debut season in England so Mourinho is looking for a reliable partner for Eric Bailly.

The likes of Toby Alderweireld and Jerome Boateng have been strongly linked in recent weeks but Tottenham and Bayern Munich won’t let their defenders go on the cheap so it looks like United are eyeing alternative targets.

Bonucci has emerged as a possible solution and the Metro are citing a report from Corriere dello Sport that claims Mourinho has now urged his Man Utd bosses to wrap-up a deal swiftly before Chelsea enter the bidding while City and PSG are mentioned as other potential suitors.

Chelsea are expected to be extremely active in the transfer market this summer as in-coming boss Maurizio Sarri looks to revamp the squad he’s set to inherit from Antonio Conte and a centre-back is among his priorities.

Bonucci could be viewed as a potential replacement for David Luiz with the Brazilian international tipped to leave Stamford Bridge after falling out-of-favour during an injury-plagued campaign last year.

However, it seems United are in pole position to sign Bonucci as the Metro claims that Mourinho wants a deal quickly secured to sign the 31-year-old and they hope to snap him up at a reasonable price following AC Milan’s recent transfer ban.

The Italian international only joined AC Milan last summer following seven hugely successful years at Juventus but Bonucci could be on the move after the San Siro club were slapped with a two-year transfer ban for breaching Financial Fair Play guidelines.