[Photos] First Pics Of Jorginho In No.5 Shirt After Completing £50m Chelsea Move

Chelsea have announced on Chelseafc.com that Jorginho has joined the club on a five-year contract from Napoli in a deal reportedly worth £50m.

The summer transfer window is open and managers are working hard on their transfer targets so we’ll bring you all the latest gossip from around the globe. Today, Jorginho joins Chelsea…. Chelsea have announced on Chelseafc.com that Jorginho has joined the club on a five-year contract from Napoli in a deal reportedly worth £50m.

The Italian international has developed in to one of the most in-demand midfielders in Europe since joining Napoli from Verona in 2014 and he played a key role under Maurizio Sarri last season to help the Naples club push Juventus all the way in the Serie A title race.

Jorginho’s performances have led to interest from across Europe and after initially being tipped to join Manchester City, news emerged last week that Chelsea had hijacked their proposed deal with widespread reports suggesting the Blues had tabled a higher offer to Napoli.

The Mirror claim the fee is £50m and Brazilian-born star flew-in to London to undergo his medical late last week and agree personal terms over a long-term contract worth £100,000-a-week.

Those formalities have now been completed as Chelsea have announced on their website that Jorginho has joined the club on a five-year contract and will wear the No.5 shirt this coming season. 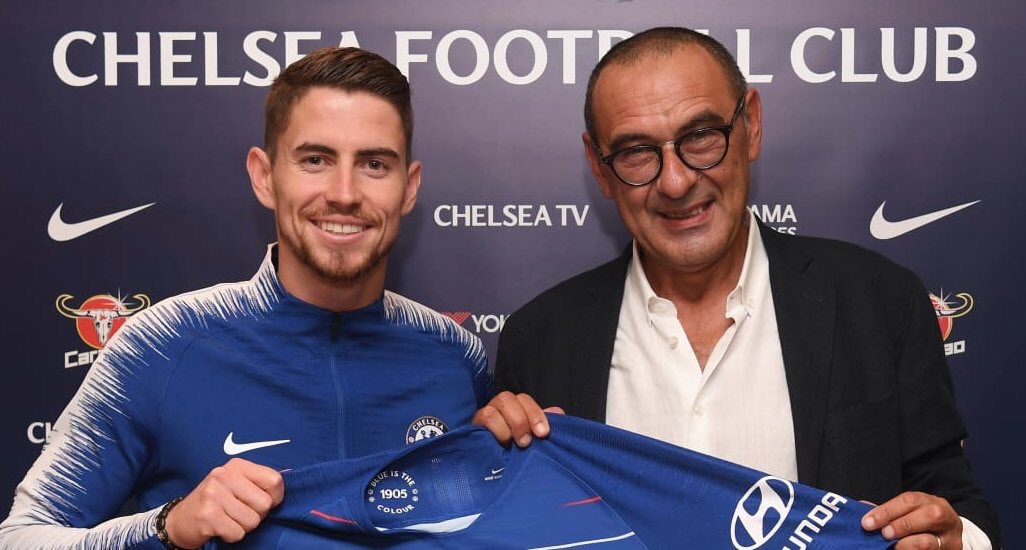 After completing his move to Stamford Bridge, Jorginho expressed his delight at joining a ‘big team’. He told the clubs website:

‘I am absolutely ecstatic to be here at Chelsea. It is not easy to become part of such a big team so I am very, very happy. I am excited to play in such an intense league, for a team that gives everything to play and win.’

Jorginho becomes Chelsea’s first major signing of the summer and he follows former boss Sarri to the club after the 59-year-old was confirmed as Antonio Conte’s replacement in west London.

The Blues have been in the market for a new midfielder as Tiemoue Bakayoko endured a frustrating first season at the club while Danny Drinkwater is expected to leave after failing to establish himself following his move from Leicester.

Jorginho will be a big upgrade on the duo as the South American is one of the best deep lying playmakers in Europe and should form a superb partnership alongside N’Golo Kante this season.