Liverpool are ready to trump Chelsea by launching a £62m bid to sign AS Roma goalkeeper Alisson Becker this week as Jurgen Klopp looks to buy a new No.1

The summer transfer window is in full swing and managers are working hard on their transfer targets so we’ll bring you all the latest gossip from around the globe. Today, Liverpool are ready to launch a move to sign Chelsea target Alisson Becker… 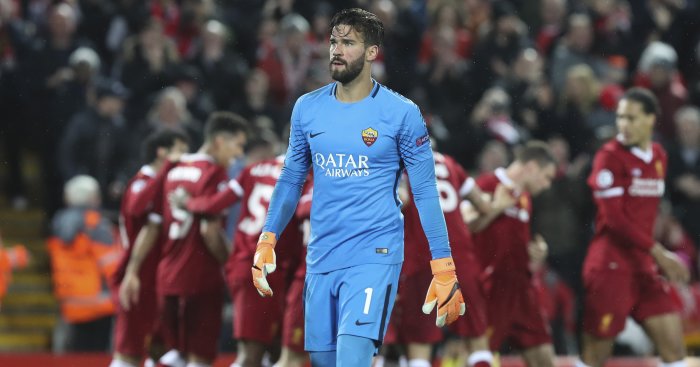 Liverpool are ready to trump Chelsea by launching a £62m bid to sign AS Roma goalkeeper Alisson Becker this week as Jurgen Klopp looks to buy a new No.1, according to a report by TeamTalk.

Klopp has been assessing his goalkeeping options after Loris Karius made two costly mistakes during Liverpool’s Champions League final defeat to Real Madrid last season. The Reds have been linked with a number of top class keepers but there were suggestions Klopp could stick by Karius or even hand Danny Ward a chance to stake his claim for the first team jersey.

However, Karius made another error during Liverpool’s friendly with Tranmere last week prompting fresh speculation that Klopp will dip in to the transfer market to solve his problems between the sticks.

Alisson has been touted as a prime target all summer and Marca reported recently that Chelsea and Real Madrid are battling Liverpool over the signature of the Brazilian international.

New Blues boss Maurizio Sarri is expected to be in the market for another goalkeeper as Thibaut Courtois has hinted he’d like to return to Spain to be closer to his family after failing to agree terms over a new contract – which has just one year left to run – and Alisson has seemingly been lined-up as a replacement.

However, TeamTalk are citing a report from the Mirror that claims Liverpool are ready to step-up their interest and steal a march on Chelsea by launching a £62m [€70m] bid to sign Alisson this week.

Klopp defended Karius following his latest gaff but the newspaper says the Reds boss has decided to offload the German youngster this summer and will sanction his exit once a deal for Alisson has been wrapped-up.

Liverpool may struggle to sell Karius for decent money so they may loan him for the season and cash-in on Simon Mignolet with Ward then promoted to be Alisson’s understudy next season if they were able to successfully lure the South American to Anfield.

We’ll have to wait and see how things progress as there is still plenty of time for the likes of Chelsea to launch rival bids so it’s going to be very interesting to see where Alisson ends up if he does leave Rome this summer.