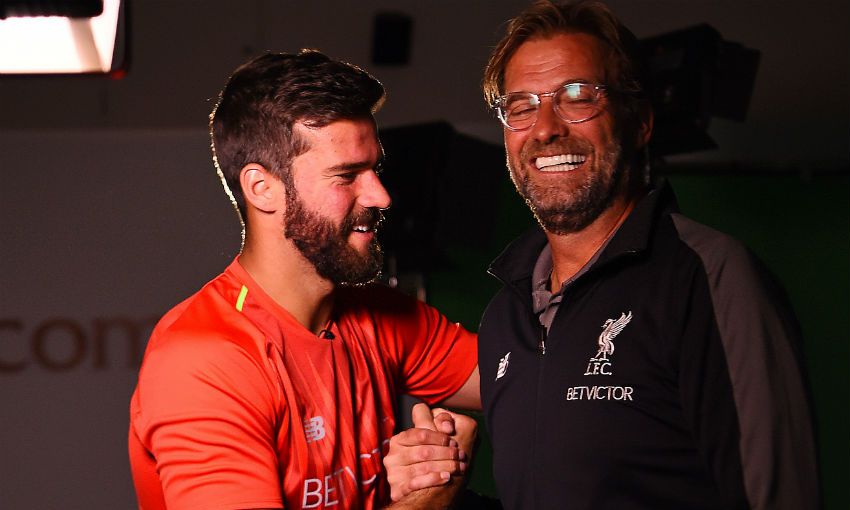 After weeks of speculation, Liverpool finally agreed a mega deal with AS Roma earlier this week and Alisson has confirmed he cut short his holiday in Sardinia to fly to Merseyside to complete the move.

The 25-year-old underwent his medical on Thursday morning before putting pen-to-paper on a long-term contract and Liverpool announced on their official website later that night that Alisson had joined the club.

The precise fee hasn’t been disclosed but the Guardian are one of several media outlets claiming that Liverpool have paid an initial £56m up front with a further £9m coming in add ons based on Premier League and European success.

That £65m deal shatters the world record fee paid for a goalkeeper so it’s another huge statement of intent by Liverpool following on from the world-record deal [for a defender] for Virgil van Dijk in January.

After completing his move, Alisson was pictured with new boss Jurgen Klopp – who seemed delighted to have got his man – and he’s admitted it’s a ‘dream come true’ for him to have joined such a prestigious club.

The South American also says he’s excited to join a developing group of players that are ready to compete for major trophies at the highest level and he’ll give his all to bring success to Anfield. The full transcript of the interview is available on Liverpoolfc.com, here are some snippets:

How pleased are you to have got this deal done to become a Liverpool player?

I’m really happy, it’s a dream come true to wear such a prestigious shirt for a club of this size that is used to always winning. In terms of my life and my career it’s a huge step for me being part of this club and this family. You can be certain that I’ll give my all.

Is it true that you cut short your holiday to fly to Liverpool and come and get this deal done?

Yes, I did cut them short a bit but I was immensely satisfied to do so, to make this dream come true and take the next step in my career. It’s a step forward and when you’re happy in what you’re doing, nothing is a sacrifice, so I left my family behind to get the issues resolved. I’m also representing them here, they’re here with me in my heart. I’m really happy with what I’ve seen here, it’s so organised. This is going to be our new home.

There has been a lot of speculation about you this summer, but why are Liverpool the right club for you?

As I said previously, Liverpool are a team with a habit of winning, that have fanatical fans that are behind the team in every game. Playing against them last year in the Champions League, I was able to experience that atmosphere and that game had an influence on me. Once I heard they were interested in me, I started thinking about the possibility of playing for Liverpool. I’m coming from a club where I was very happy and I’m sure I’ll be very happy here. I’ll give my all to give something back to the fans and join this team because it’s a developing group achieving great things. They got to the Champions League final and that’s something that motivates me, to be part of a group that competes at a high level. I believe this is going to add a great deal to my career in terms of professional growth, so I can add something to the team for the team to grow even further because it’s a massive club.

Klopp was in the market for a new number one after Loris Karius made two costly mistakes against Real Madrid in the Champions League final last season while Simon Mignolet’s future is also in doubt after falling out of favour.

Alisson was one of the best keeper’s in the world last season after excelling for Roma while he was also Brazil’s number one at the World Cup finals so I think he’ll prove to be an excellent signing for Liverpool.