Arsenal continue their pre-season preparations when we take on Atletico Madrid in the International Champions Cup at the Singapore National Stadium this afternoon [12.35pm UK].

Our first official pre-season game was a comprehensive 8-0 victory over Boreham Wood while we’ve also played a couple of behind closed doors matches at the training ground Crawley and Brentford. So this is going to be the first real test of Unai Emery’s reign in north London since he replaced Arsene Wenger as manager as Atletico are one of the best sides in Europe.

Arsenal will be out to avenge our frustrating 2-1 aggregate defeat to Atletico in the 2017/18 Europa League semi-final that saw us blow a great chance in the first leg to put one foot in the final.

Atletico are an organised side who are extremely tough to break down so it will be interesting to see how Emery approaches the match and tries to find a way past arguably the best defensive unit in Europe.

Emery is expected to field a strong starting eleven but he will look to give the whole squad a run out over the course of the 90 minutes.

Mesut Ozil, Mohamed Elney and Alex Iwobi returned to pre-season training last week but Emery has confirmed they aren’t ready to play yet so won’t feature against Atletico today.

Calum Chambers has been playing alongside Sokratis in training ahead of the game so we could see them line-up together in the middle of defence while Hector Bellerin and Sead Kolasinac should occupy the full-back positions.

Summer signing Bernd Leno should get another chance to impress while Aaron Ramsey will look to put his contract situation to one side and should start in midfield.

Alexandre Lacazette has been playing as the central striker in pre-season with Pierre-Emerick Aubameyang deployed on the left side of attack so it will be interesting to see if that’s how Emery plans to use the forwards this season.

The likes of Rob Holding, Shkodran Mustafi, Henrikh Mkhitaryan, Matteo Guendouzi, Reiss Nelson, Lucas Perez and Ainsley Maitland-Niles will also be hoping for a chance to impress this afternoon.

Obviously we’ll continue to be without the likes of Lucas Torreira, Granit Xhaka, Stephan Lichtsteiner and Danny Welbeck as they are still on holiday following their World Cup exploits. 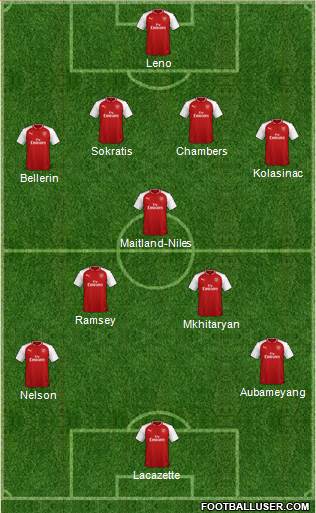 Arsenal 2-1 Atletico Madrid: It’s difficult to make any predictions for friendly games like this as the players are still working their way back to fitness and we’re not sure what kind of line-up each manager will put out. However, Arsenal have the majority of their squad back together after the World Cup and Madrid are still missing several key men so I fancy us to edge it 2-1.

While Atletico were the favourites for the Europa League tie last season, Arsenal are the 19/20 favourites this time around – which is probably reflective of the players missing for the Spaniards as they are available at 5/2. Any onlinecasino should offer new customers a welcome bonus but it’s worth doing your research to find the best offers and bonuses before placing your bets.

Many Dutch bookmakers are offering excellent odds on English football games but my prediction of 2-1 Arsenal is available at best odds of 7/1 – see website for full markets and odds. I also like the look of Lacazette to open the scoring at 11/2 and if we include that in a 2-1 Arsenal win we can get odds of 14/1 – which look very tempting to me.