Manchester United have launched an £89.3m bid to sign Sergej Milinkovic-Savic but Lazio are ready to hold out for closer to £107m for the midfielder

There is plenty of Manchester United gossip doing the rounds in the papers with the English giants linked with a whole host of star names ahead of deadline day. Today, United have made a big-money bid for Sergej Milinkovic-Savic… 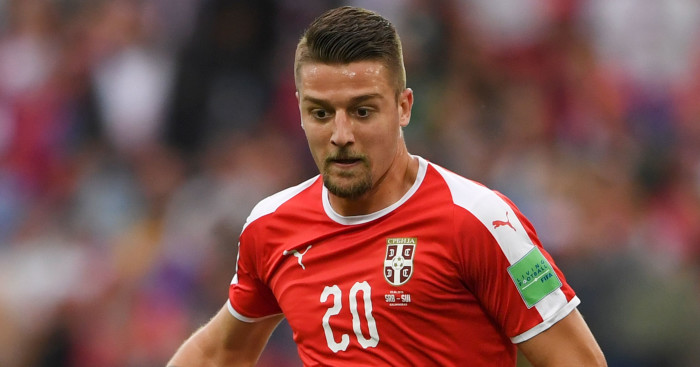 Manchester United have launched an £89.3m bid to sign Sergej Milinkovic-Savic but Lazio are ready to hold out for closer to £107m for the midfielder, according to reports in Italy via TeamTalk.

Jose Mourinho is desperate to further strengthen his squad during the closing stages of the window after being left disappointed by United’s activity so far with Fred the only significant addition as Lee Grant is a third-choice goalkeeper and Diogo Dalot is considered ‘one for the future’.

United are reportedly in the market for another centre-back with several names being linked but it seems they are also searching for a top class midfielder amid strong speculation suggesting Paul Pogba is trying to engineer a move out of Old Trafford this summer.

TeamTalk are citing a report from Il Messaggero that claims Man Utd have identified Milinkovic-Savic as the man to replace Pogba if the French World Cup winner is successful in forcing a proposed move to Barcelona.

The Italian publication says United have now formalised their interest by tabling an opening £89.3m offer but Lazio president Claudio Lotito is determined to squeeze more out of the Manchester giants and is demanding closer to £107m.

It’s suggested in the report that Lazio are in no rush to sell Milinkovic-Savic to Man Utd as they feel Real Madrid may come calling later in the summer after selling Cristiano Ronaldo while Luka Modric and Mateo Kovacic are also being linked with moves away from the Bernabeu.

It remains to be seen whether United will return with an improved offer but they’ll need to act fast if they want to get a deal agreed for the Serbian international as the transfer window in England closes at 5pm on Thursday.

Milinkovic-Savic has developed in to one of the most highly-rated young midfielders in Europe since joining Lazio from Genk in 2015 so he’d be an excellent signing for Man Utd, but I’m not convinced fans would be too pleased if his arrival meant Pogba’s departure.