Chelsea take on Huddersfield at the John Smiths Stadium on Saturday afternoon. Here is the side I think Maurizio Sarri will select for the game:

Premier League football has returned and Chelsea kick off their 2018/19 campaign when they take on Huddersfield at the John Smiths Stadium on Saturday afternoon. Here is the side I think Maurizio Sarri will select for the game:

Goalkeeper: Kepa Arrizabalaga is set to make his debut after completing a world record £71m move from Athletic Bilbao. The Spanish youngster will replace Thibaut Courtois after he joined Real Madrid with Willy Caballero expected to remain as No.2.

Defence: Sarri has confirmed Cesar Azpilicueta will be captain tomorrow so he’s certain to start at right-back while Marcos Alonso is expected to line-up on the opposite side of defence.

David Luiz appears to be back in favour under Sarri so the Brazilian international could line-up against Huddersfield with Antonio Rudiger favourite to partner Luiz ahead of Gary Cahill and Andreas Christensen.

Midfield: New signing Mateo Kovacic is not expected to be in contention as he’s only just started pre-season training following his exploits at the World Cup so Chelsea fans will have to wait a little longer to get a glimpse of the Croatian.

N’Golo Kante has only recently started training after helping France win the World Cup but if Sarri is to risk any of his late arrivals it will probably be the Frenchman.

Jorginho is expected to make his Premier League debut and has impressed in pre-season since making his move from Napoli while Cesc Fabregas will be hoping to start ahead of Ross Barkley in midfield.

Attack: Olivier Giroud is lacking match practice so Alvaro Morata is expected to lead the line up front and the Spaniard will be looking to impress after a frustrating campaign last season.

Eden Hazard has only just started his pre-season training so the Belgian international isn’t likely to be risked from the start meaning Willian should start in attack amid speculation surrounding his future at Stamford Bridge.

Pedro is favourite to join Willian in attack, although youngster Callum Hudson-Odoi impressed in pre-season so he’ll be hoping to feature at some point against Huddersfield this weekend. 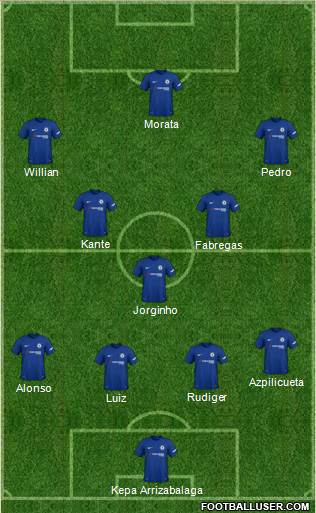