Manchester City begin the defence of their title with a trip to the Emirates to face Arsenal on Sunday. Here is the team we think Guardiola will select.

Premier League football is back and Manchester City begin the defence of their title with a trip to the Emirates to face Arsenal on Sunday afternoon. Here is the team we think Pep Guardiola will select.

Goalkeeper: Ederson proved to be an excellent signing last season and the Brazilian will be looking to continue that form into this campaign, starting against the Gunners.

Defence: Benjamin Mendy is fit after recovering from a serious injury that hampered him throughout last season and the Frenchman will be desperate to impress at left-back this campaign.

Vincent Kompany should start ahead of Aymeric Laporte in defence while John Stones could be given a chance to build on his impressive form for England at the World Cup despite not being 100% match fit.

International team-mate Kyle Walker also hasn’t had long to prepare after arriving back late from his exploits in Russia but he should be fit to start at right-back with Danilo injured.

Midfield: Fernandinho is certain to keep his place in the holding midfield role after City failed to sign his long-term replacement this summer so Ilkay Gundogan may have to make do with a place on the bench.

Guardiola said Kevin de Bruyne has arrived back in excellent condition and I think the Belgian superstar will start despite only beginning his pre-season preparations on Monday. David Silva is a major doubt but Bernado Silva has impressed in pre-season so should keep his place in midfield.

Attack: Leroy Sane enjoyed a summer off following his shock omission from the German World Cup squad so he’s certain to start in attack against Arsenal this weekend.

Sergio Aguero is also fit to lead the line up front meaning Gabriel Jesus may have to make-do with a place on the bench but it will be interesting to see who starts on the right side of attack.

Raheem Sterling started his pre-season on Monday and Guardiola says he’s looking sharp but Riyad Mahrez is the fitter of the two men after making a swift recovery from a knock so I expect him to get the nod on Sunday. 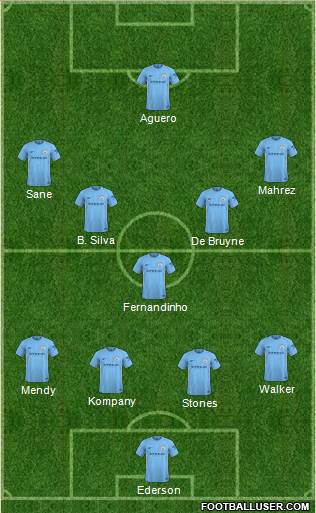