The Premier League transfer window may be closed but European clubs can still buy from English teams and managers are planning for the future so we’ll bring you all the latest gossip. Today, Liverpool are linked with Adrien Rabiot…. 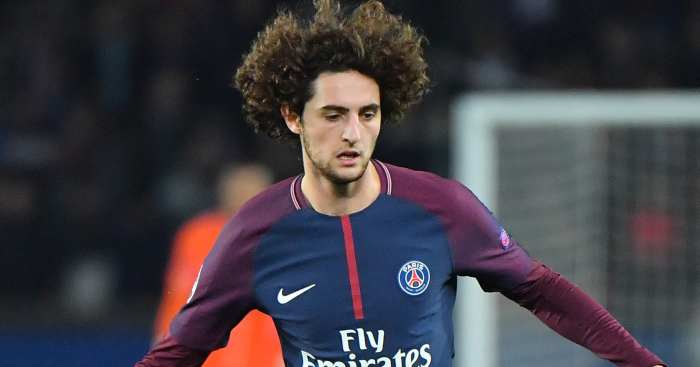 Liverpool are plotting a sensational swoop to sign Paris Saint-Germain midfielder Adrien Rabiot on a free transfer next summer, according to reports via TeamTalk.

Rabiot has been with PSG his entire career after coming through their youth ranks and he initially struggled to become a regular after breaking in to the first team set-up in 2012. However, the 23-year-old finally established himself last season as he made 44 appearances in all competitions to help PSG win a domestic treble.

Despite showing some excellent form for his club, Rabiot was left out of Dider Deschamps’ France squad for the World Cup finals and that snub has led to the midfielder considering his future at the Parc des Prince this summer.

Rabiot – who has just one year left on his current contract – has so far refused to sign an extension which has led to intense speculation he could be on the move and he’s been strongly linked with a move to several top European clubs.

A switch to Barcelona has been touted with L’Equipe, via TeamTalk, claiming the Catalan giants could make a late swoop to sign the French international during the closing stages of the window.

However, if that move fails to come to fruition, the report suggests that Liverpool are ready to try and sign Rabiot on a pre-contract agreement in January ahead of a free transfer move to Anfield next summer.

The 23-year-old could jump at the chance to join Liverpool as he’s previously confirmed he’s a boyhood fan of the club and wants to play in the Premier League.

Rabiot is quoted as saying by TeamTalk:

“I would love to play in the Premier League…I was very fond of Liverpool when I was young.”

Jurgen Klopp splashed out big money on Fabino and Naby Keita this summer but with James Milner coming to the end of his career, and Jordan Henderson and Adam Lallana suffering niggling injury problems the Reds boss could be eyeing Rabiot as a long-term option.

We’ll have to wait and see how things develop over the coming weeks and months but if Rabiot doesn’t sign a new contract with PSG or join Barca then I think he’d be a sensational signing for Liverpool if they could snap him up for nothing next summer.