Chelsea welcome Arsenal to Stamford Bridge on Saturday evening. Here is the side I think Maurizio Sarri will select for the game:

Chelsea will look to build on their impressive start to the season when they welcome Arsenal to Stamford Bridge on Saturday evening. Here is the side I think Maurizio Sarri will select for the game:

Goalkeeper: Kepa Arrizabalaga made a solid debut last week following his world record move from Athletic Bilbao so the Spaniard is certain to keep his place ahead of Willy Caballero this weekend.

Defence: Chelsea were relatively untroubled at the back during their 3-0 victory at Huddersfield last weekend so I don’t see the need for Sarri to make any changed to his back four.

Cesar Azpilicueta should once again start at right-back with Marcos Alonso on the left while David Luiz may keep his place ahead of Gary Cahill and Andreas Christensen alongside Antonio Rudiger in the middle of defence.

Midfield: New signing Mateo Kovacic missed the win at Huddersfield and he’s unlikely to be risked from the start against Arsenal as he’s still working his way back to full fitness and finding his feet in England following his deadline day move from Real Madrid.

Jorginho made an impressive debut last weekend so no doubt the Italian will be looking to build on that performance alongside N’Golo Kante in midfield against the Gunners.

Ross Barkley put-in an indifferent display at the John Smith’s Stadium so he didn’t really take his chance to nail down his place. Cesc Fabregas is still not 100% fit so Sarri may give Ruben Loftus-Cheek a chance to impress this weekend.

Attack: Eden Hazard made a cameo appearance off the bench last time out but the Belgian international is almost certain to be recalled against the Gunners on Saturday.

There is a suggestion he could be deployed as a false 9 up front in place of the miss-firing Alvaro Morata but I think we’ll see Hazard start in his favoured position on the left side of the attack.

Willian may be the man to make way as Pedro could keep his place after getting himself on the score-sheet against Huddersfield while Olivier Giroud may have to make do with a place among the substitutes once again. 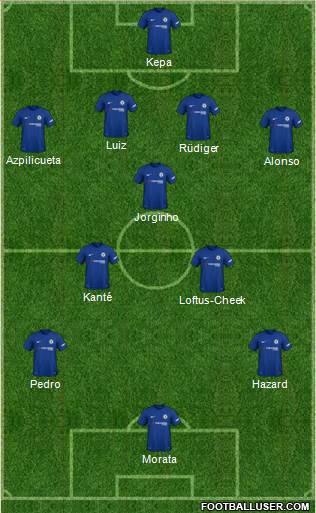