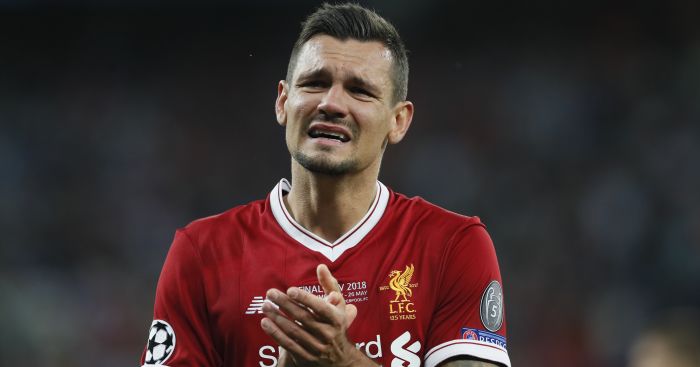 Liverpool have been dealt an injury blow ahead of crucial games with Tottenham and Chelsea after Dejan Lovren was ruled out until at least mid-October with a stomach strain, according to TeamTalk.

The centre-back was given an extended break following his exploits at the World Cup this summer where Lovren played a key role in helping Croatia reach the final before their eventual defeat to France.

It later emerged that Lovren had been carrying a stomach injury throughout his time in Russia with the defender admitting that playing for his country in the knockout stages ‘almost killed him’.

The 29-year-old was assessed upon his return to Melwood in August and there were hopes that Lovren could be back in contention to face Spurs after the current international break having returned to light training.

However, TeamTalk are reporting that the injury is worse than originally thought and after sending Lovren to see a specialist in Holland, Liverpool have now conceded they will be without the centre-back until at least mid-October.

The news will come as a huge blow to Jurgen Klopp as he prepares his squad for a crucial seven game run during September and October that will define their success across three separate competitions.

Lovren will miss Premier League games against title rivals Tottenham, Chelsea and Manchester City over the coming weeks as well as a clash with former club Southampton at Anfield.

The defender will also sit out upcoming Champions League group stage games with Paris Saint-Germain and Napoli while the League Cup third round tie with Chelsea will also come too soon.

The report suggests that Liverpool hope to have the Croatian star available again for the trip to Huddersfield on October 20 after the next international break but he’ll be missed over the next few weeks.

Joe Gomez has impressed alongside Virgil van Dijk during Lovren’s absence so far this season and the England international is expected to keep his place against Spurs on Saturday.

However, Klopp knows he’s going to need to rotate his squad during the upcoming period if Liverpool are to stay fresh during a crucial seven-game run so Lovren would certainly have been a useful player to have around.