Here is our match preview ahead of Tottenham’s Champions League clash with Inter Milan including team news, expected line-ups and predicted score

Tottenham will be looking to bring home a positive result when they kick off their Champions League campaign against Inter Milan at the San Siro this evening.

Spurs did superbly well to progress to the knockout stages of the competition last season having topped their group ahead of Real Madrid and Borussia Dortmund but they came unstuck against Juventus in the round of 16.

Mauricio Pochettino will be desperate to make-up for that disappointment by making it to at least the quarter-finals this season but they’ve been handed a tough group that includes Barcelona, PSV Eindhoven and Inter.

Therefore, a positive start is required but Tottenham head in to the game off the back of consecutive Premier League defeats to Watford and Liverpool so Pochettino will be hoping for a response from his players.

The north Londoners may fancy their chances as they’ll face an Inter side that have endured a tough start to their season having won just one of their four Serie A games so far and slumped to a home defeat to Parma at the weekend.

Tottenham will continue to be without Dele Alli as the midfielder is still nursing a hamstring injury that he suffered while away with the England squad during the recent international break.

Hugo Lloris is also missing as the French international is out with a thigh problem so Michel Vorm will continue in goal while Moussa Sissoko is still on the sidelines with a hamstring complaint.

Pochettino has decided to leave Toby Alderweireld and Kieran Trippier back in London so Serge Aurier and Davinson Sanchez are expected to be recalled.

Inter will be without Sime Vrsaljko due to a knee injury while Danilo D’Ambrosio is expected to pass a late fitness test. 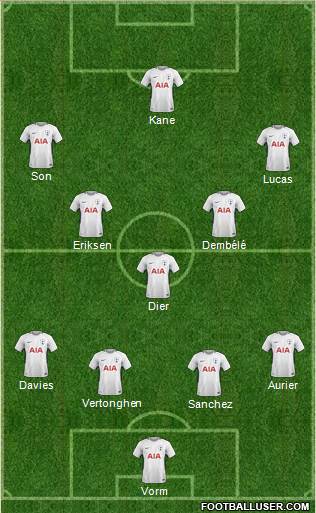 Inter 1-1 Tottenham: Spurs won on away goals in the last meeting between the two sides following a 4-4 aggregate draw in the 2012/13 Europa League but I’m not expecting a classic this time around. Spurs have looked poor in recent weeks and Harry Kane is nowhere near his best. However, Inter have also struggled to find their fluency during the opening weeks of the season and I think Spurs still have enough quality to take home a well-earned point.