Edwin Van Der Sar confirmed last week that this season, his fifth at United, will be his last at the club as he will retire from professional football. Van Der Sar has been a hugely important part of the team in recent times and will be a massive loss to the club. Sir Alex has a big decision to make as to who will replace the Dutchman between the sticks next season. United struggled to cope with the loss of Peter Schmeichel back in 1999 and Fergie will want to avoid a similar situation this time around. Below we look at some of the favourites to fill Edwin’s boots, some outside bets and look at what we already have.

Stekelenburg is the man who has replaced Van Der Sar in the Dutch natonial team and is currently plying his trade in his homeland with Van Der Sar’s former club Ajax. Having spent a few years as Edwin’s understudy in the national team Fergie will no doubt be picking Van Der Sar’s brain for information on his fellow countryman. Stekelenburg would seem to be a very solid choice to take over the number 1 jersey at Old Trafford. He performed well in the Netherlands run to the final in the 2010 World Cup and has gained Champions League experience at Ajax. At 28 years of age Stekelenburg is just coming into his peak and looks to be ready to step up a level.

The 24 year old German has shown great promise in recent seasons and has huge potential. Neuer burst onto the scene in in 2006 and soon cemented his place as the number 1 at Schalke 04. He has the experience of Champions League football and was a pivotal figure as Schalke reached the Quarter-Final stage of the Champions League in 2008 with Neuer saving two penalties in the round of 16 against Porto to see his side through. The young keeper appeared to be Germany’s third choice heading into the World Cup in South Africa however due to the death of Robert Enke and an injury suffered by Rene Adler he was elevated to first choice for the tournament. Neuer impressed as Germany finished in third place and United have had their eyes on him ever since. 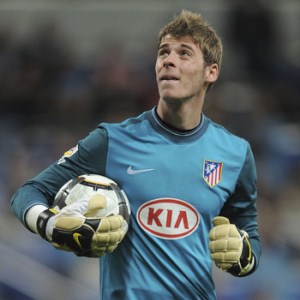 David De Gea has been continuously linked with United over the last year or so.  De Gea is a product of Atletico Madrid’s youth system and has been somewhat of a revelation since he burst onto the scene in La Liga. It would be a bit of surprise if Fergie were to opt for the Spaniard, the reasons for this are three-fold.

At 20 years of age I feel it may well be difficult to pry De Gea away from a club he has grown up at while he is still finding his feet. It would also be seen as a bit of a risk to hand over the number 1 jersey to someone so young. Finally signing De Gea is likely to cost around £20 million which seems a lot to pay for a player who is relatively unknown outside of Spain.

Hugo Lloris has been one of the most impressive keepers in recent years. The 24 year old moved to Lyon from hometown club Nice in 2008 and has gone on the establish himself as France’s number 1. Lloris has experience of playing at the highest level and has put in some incredible performances for Lyon, most notably against Real Madrid in the Champions League last season where he made some vital saves as Lyon knocked out Cristiano Ronaldo and company in the last 16.

Jose Reina needs no introduction and has been one of the most consistent keepers in the Premier League since his arrival in 2005. Reina has made more than 200 appearances for Liverpool and was reported to be somewhat disillusioned with life at Anfield before Christmas. It would be a major shock if Liverpool agreed to sell one of their best players to United especially considering Reina renewed his contract last season. If Reina were to make the switch from Anfield to Old Trafford he would bring a wealth of experience of both Premier League and European football.

Kuszczak signed for United in 2006 from West Bromwich Albion and has proved an able understudy for Edwin Van Der Sar over the past four seasons. The Pole feels with Edwin’s retirement his time has come and has stated his desire to be United’s first choice keeper. While Tomasz has always stepped up when called upon it appears unlikely that Fergie will replace Van Der Sar from within and that could lead to Kuszczak departing Old Trafford this summer.

Anders Lindegaard signed for Man United in this transfer window and is unknown to many United fans. Lindegaard spent 6 years in his native Denmark at Odense BK before former United keeper Roy Carroll’s arrival in 2009. Lindegaard moved to Norwegian outfit Aalesund for whom he made 38 appearances before his move to United. Anders has 4 caps for Denmark and made his United debut in Saturdays FA Cup victory over Southampton. He put in solid display against the Saints and will hopefully develop over the coming years however it is unlikely he will be handed the responsibility of replacing Van Der Sar. It is widely believed that Lindegaard will begin life at United by replacing Kuszczak as second choice with a view to challenging for the number one spot.

Whoever replaces Edwin Van Der Sar between the posts will have very big boots to fill and Sir Alex will be hoping to avoid the trouble he had trying to replace the Great Dane in 1999. What do you think? Who do you think will be United’s number 1 and who would you like?