Arsenal take on Vorskla at the Emirates in the Europa League tonight. Here is a preview with the latest team news, line-ups and prediction

Arsenal will be looking to make a winning start to their Europa League campaign when FC Vorskla come to the Emirates tonight.

Former boss Arsene Wenger missed the chance to bow out on a high after we slumped to a disappointing 2-1 aggregate defeat to eventual winners Atletico Madrid in the semi-finals of last year’s competition so the players will be hoping to go one step further this season.

We certainly have the perfect man in charge to achieve that target as Unai Emery won the Europa League three times with Sevilla so the Spaniard obviously knows what it takes to go all the way in knockout competitions.

Emery endured a tough start to life in north London after losing his opening two games against Man City and Chelsea but there have been signs of improvement in recent weeks as we head in to tonight’s game off the back of three consecutive victories.

We came from behind to beat West Ham 3-1 at the Emirates before seeing-off Cardiff in a five-goal thriller while we held on to secure a hard fought 2-1 win at Newcastle United last weekend so the boys should be in confident mood tonight.

Arsenal will face little known Ukrainian outfit FC Vorskla and we should have no problem getting all three points and eventually progressing from a group that also includes Qarabag and Sporting Lisbon.

Arsenal will continue to be without Laurent Koscielny as he’s still working his way back from an Achilles injury while Sead Kolasinac and Ainsley Maitland-Niles are also still on the sidelines.

Emery is expected to make wholesale changes to his starting eleven with the likes of Petr Cech, Hector Bellerin, Sokratis, Aaron Ramsey, Granit Xhaka, Mesut Ozil and Pierre-Emerick Aubameyang all rested ahead of Sunday’s clash with Everton.

Lucas Torreira is set to make his full debut in midfield after impressing off the bench while Bernd Leno and Stephan Lichtsteiner are also expected to be handed their first starts since arriving in the summer. 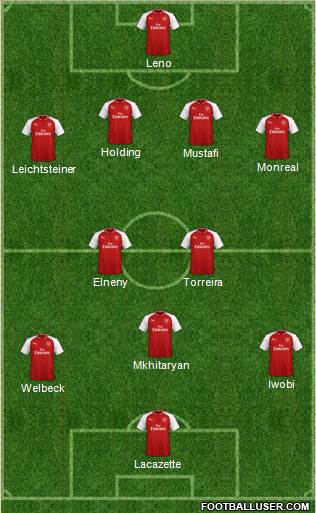 Arsenal 3-0 Vorskla: This will be the first ever meeting between the two sides but it’s difficult to see past anything other than a home win tonight. No doubt Vorskla will be keen to impress on their big European away day and Arsenal will field a weakened side, however, we should still have way too much quality for the Ukrainian’s.