Liverpool will be looking to get back back to winning ways when they take on Chelsea on Saturday. Here is the team we think Jurgen Klopp will select:

Liverpool will be looking to get back back to winning ways when they take on Chelsea at Stamford Bridge on Saturday evening. Here is the team we think Jurgen Klopp will select:

Goalkeeper: Simon Mignolet didn’t do enough on his first start of the season on Wednesday night to suggest he should be Liverpool’s first choice goalkeeper so Alisson is certain to be recalled on Saturday after being rested in the Carabao Cup.

Defence: Klopp is expected to make wholesale changes to the defence that lost against Chelsea in the cup with Nathaniel Clyne, Dejan Lovren, Joel Matip and Alberto Moreno all making way.

Trent Alexander-Arnold will therefore return at right-back while Joe Gomez could come in to the middle of defence alongside Virgil van Dijk with the Dutchman expected to recover from a minor rib problem that he picked up last weekend.

Andrew Robertson was sorely missed by Liverpool in midweek so the Scottish international will be recalled at left-back with Moreno making way following a disappointing performance in the League Cup.

Midfield: Fabinho showed in midweek why Klopp is right to think he’s not ready to be a regular starter just yet as he struggled with the intensity of the game at times so he’ll have to bide his time.

Naby Keita put in a better performance at Anfield but I still think he’ll drop out with Jordan Henderson and Georginio Wijnaldum recalled to the starting eleven alongside James Milner.

Attack: Mohamed Salah was named on the bench on Wednesday and only made a second half appearance so the Egyptian international is expected to be recalled to the starting eleven at Stamford Bridge.

Sadio Mane should keep his place in attack which means Xhedran Shaqiri may drop out after starting the last two matches while Daniel Sturridge may also feel unfortunate to find himself on the bench again.

The England international scored a lovely volley in the Carabao Cup defeat but Roberto Firmino is expected to be recalled up front so Sturridge will have to make do with a place among the subs once again. 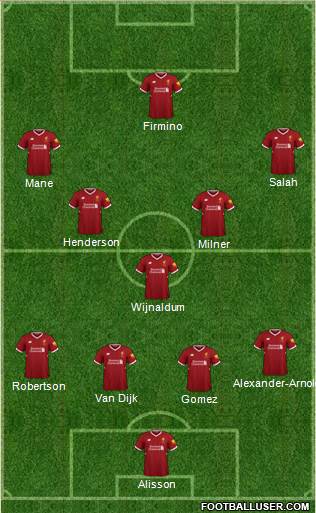