Manchester United take on Valencia in the group stages of the Champions League on Tuesday night. Here is the line-up I think Jose Mourinho will go with:

Manchester United will be desperate to get their season back on track following a turbulent week when they take on Valencia in the group stages of the Champions League on Tuesday night.  Here is the line-up I think Jose Mourinho will go with:

Goalkeeper: Mourinho is under huge pressure to get back to winning ways so I don’t think he’ll be taking any chances with his line-up tomorrow and will select his best team which means David De Gea will keep his place in goal.

Defence: United played three at the back against West Ham and it was a disaster during the 3-1 defeat so Mourinho is expected to revert to a flat back four against Valencia tomorrow night.

There will be at least one change as Ashley Young has been ruled out with a knock that he picked up at the weekend so Antonio Valencia could get recalled ahead of youngster Diogo Dalot at right-back.

The Scott McTominay experiment failed so he’s likely to make way with Chris Smalling alongside Victor Lindelof and Luke Shaw keeping his place at left-back. Eric Bailly and Phil Jones will therefore have to make do with places on the bench.

Midfield: Paul Pogba has been in the spotlight in recent weeks and he’s certainly not playing well amid reports of a bust up with his manager. Mourinho hooked him in the second half against West Ham but I think the Frenchman will still keep his place against Valencia.

Nemanja Matic has admitted he was poor against the Hammers on Saturday but he’s usually one of Mourinho’s most reliable players so the Serbian international should keep his place.

Marouane Fellaini has been one of United’s more effective players recently and Mourinho may stick with the Belgian ahead of Fred in midfield while Ander Herrera has been ruled out through injury.

Attack: Jesse Lingard will also miss out once again with a groin injury that kept him out of the West Ham game so we could see Marcus Rashford recalled to play on the right side of the front three after coming off the bench to score at the weekend.

Alexis Sanchez was surprisingly axed from the squad on Saturday but Anthony Martial didn’t take his chance to shine and Mourinho highlighted this in his post-match interview.

I think we’ll see Sanchez recalled on the left side of the attack tomorrow with Romelu Lukaku once again leading the line up front and Martial dropping back to the bench alongside Juan Mata. 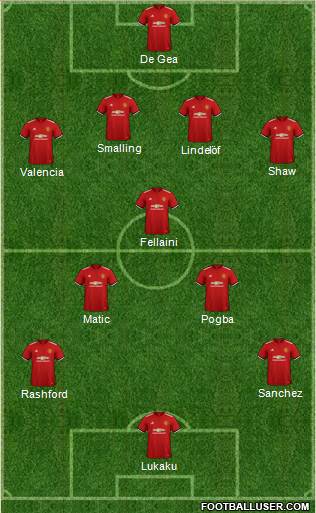