Arsenal take on Qarabag in the Europa League group stages this evening. Here is a preview with the latest team news, line-ups and prediction

Arsenal will be looking to continue their fine recent form when we take on Qarabag in Azerbaijan in the group stages of the Europa League, kick-off at 5.55pm.

We kicked off our European adventure with a 4-2 victory over FC Vorskla last month with two late goals from the Ukrainians taking some shine off the score-line so Unai Emery will be hoping to take control of Group E with another win against Qarabag.

Arsenal head in to the game in excellent form as Saturday’s 2-0 win over Watford means we’ve won our last five Premier League games and seven in all competitions so Emery has certainly turned things around since losing our opening two matches.

Qarabag lost their first group game to Sporting Lisbon so they’ll be desperate to get some points on the board with a positive result later today but no doubt Arsenal will be quietly confident against the Azerbaijan minnows.

Arsenal will be without Petr Cech as he’s been ruled out for up to four weeks with a hamstring injury that he picked up against Watford so Bernd Leno is set for an extended run in the team.

Laurent Koscielny is still working his way back to full fitness following a serious Achilles injury so he remains out along with Ainsley Maitland-Niles and Dinos Mavropanos.

Henrikh Mkhitaryan opted against applying for a special work permit that would allow the Armenian international to enter Azerbaijan amid ongoing tensions between the two countries.

The likes of Hector Bellerin, Nacho Monreal, Alexandre Lacazette and Mesut Ozil have made the 5,000 mile round trip but Aaron Ramsey has stayed at home with his pregnant wife while Pierre-Emerick Aubameyang is sick. 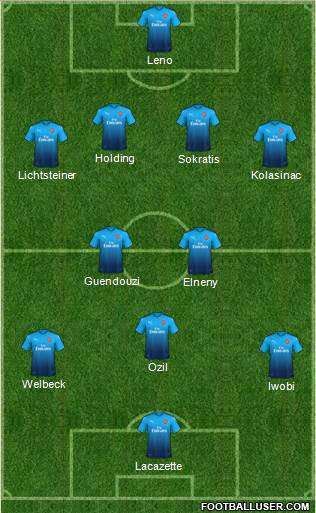 Qarabag 0-2 Arsenal: We have performed well on the road in the Europa League having won four away matches in the 2017/18 campaign and have only lost one of our last 15 group stage games in European competition so we should be confident heading in to this one. Qarabag will no doubt be keen to impress in front of their home fans but I think even a weakened Arsenal side will prove too strong.