Manchester United take on Newcastle at Old Trafford on Saturday evening. Here is the line-up I think Jose Mourinho will go with:

Manchester United will be desperate to get their season back on track following a turbulent week when they take on Newcastle at Old Trafford on Saturday evening.  Here is the line-up I think Jose Mourinho will go with:

Goalkeeper: Mourinho is under pressure to find the winning formula again but one name that is certain to keep his place is David De Gea so Sergio Romero will once again be on the bench.

Defence: United played three at the back against West Ham last weekend and conceded three times but kept a clean sheet during the 0-0 draw with Valencia on Tuesday night so I’d be surprised if Mourinho didn’t stick with that system.

Eric Bailly will hope to keep his place but Mourinho may be tempted to recall Victor Lindelof as he’s been the favoured option alongside Chris Smalling for much of the campaign. Luke Shaw should keep his place at left-back while Antonio Valencia may start ahead of the likes of Diogo Dalot and Ashley Young at right-back.

Midfield: Mourinho will be looking to Paul Pogba to step up his form as the Frenchman has struggled in recent weeks amid reports of an ongoing rift with his manager. I don’t think Mourinho will drop Pogba this weekend but the former Juventus star is under increasing pressure to produce the goods.

Nemanja Matic is one of Mourinho’s closest allays so he should keep his place but we might see the United boss freshen things up with Fred recalled in place of Marouane Fellaini.

Attack: Jesse Lingard remains a doubt with a groin injury so Marcus Rashford could keep his place on the right side of the attack as he was one of the few United players who had a decent game in midweek.

However, I wouldn’t be surprised to see Alexis Sanchez axed on Saturday as his shocking form continues. The Chilean was dropped from the squad against West Ham last weekend and was hauled off against Valencia after another poor display so Mourinho may leave him out against Newcastle.

Anthony Martial will be favourite to come in to the left side of the attack so Juan Mata may have to make do with a place on the bench while Romelu Lukaku is expected to once again lead the line up front. 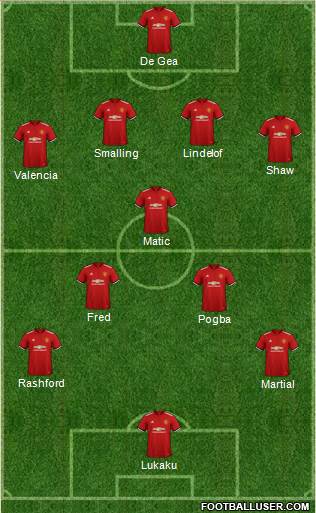