Unai Emery has confirmed that Mesut Ozil was forced to miss Arsenal’s 5-1 thrashing of Fulham on Sunday afternoon due to a back injury. 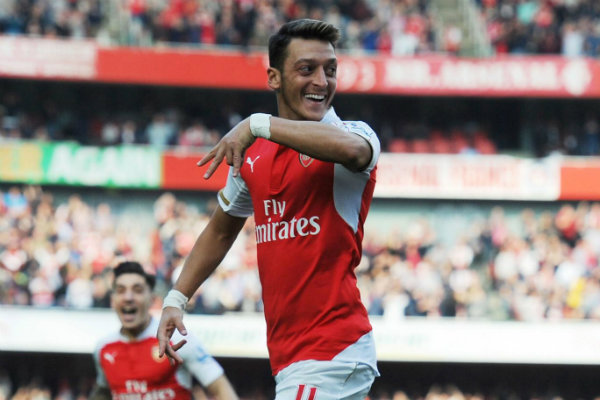 Unai Emery has confirmed that Mesut Ozil was forced to miss Arsenal’s 5-1 thrashing of Fulham on Sunday afternoon due to a back injury.

Ozil has been slowly rediscovering his form in recent weeks after a poor start to the new campaign and the German playmaker has scored 3 goals in his 8 appearances so far this season. The 29-year-old scored what turned out to be the winning goal during a 2-1 win at Newcastle last month before finding the net against Watford last weekend meaning he’s scored twice in his last three Premier League outings.

Ozil was fully expected to return to the starting eleven for Sunday’s trip to Craven Cottage after being a second half substitute during the 3-0 Europa League win over Qarabag last week.

However, he was a surprise omission from the matchday squad and Emery confirmed after the game that Ozil was forced to sit out the Fulham game after turning up to training on Saturday complaining of back pain.

on Mesut Ozil’s back spasm…
Yesterday he came in with pain and he cannot train yesterday or play today.

It’s not entirely clear how Ozil suffered the injury but I’m sure a 5,000 mile round trip to Azerbaijan on Thursday night certainly didn’t help so in hindsight it probably wasn’t the best decision to take one of our key players to Qarabag.

Thankfully, we didn’t miss Ozil yesterday as a rampant second half performance saw Arsenal thrash Fulham 5-1 thanks to braces from Alexandre Lacazette and Pierre-Emerick Aubameyang while Aaron Ramsey scored a stunner off the bench to secure our ninth victory in a row.

Ozil now has a couple of weeks to recover from his back injury and hopefully he’ll be available for the visit of Leicester City to the Emirates after the international break.