Arsenal can climb as high as third with a win when Leicester come to the Emirates this evening. Here is the side we thinks Emery will select:

Arsenal can climb as high as third with a comprehensive win when Leicester City come to the Emirates this evening. Here is the side Gooner Mac thinks Unai Emery will select for the game:

Goalkeeper: Petr Cech is set to miss out once again after failing to overcome a hamstring injury that’s kept him out for the last three weeks so Bernd Leno will get another chance to impress between the sticks.

Defence: Arsenal are also expected to be without Sokratis as the defender didn’t train over the weekend having sustained an ankle injury while playing for Greece during the international break. Laurent Koscielny has stepped-up his recovery from an Achilles injury after returning to full training but the Frenchman won’t be available for selection until next month.

Therefore, Emery has little choice other than to stick with Shkodran Mustafi alongside Rob Holding in the middle of the back four while Hector Bellerin and Nacho Monreal are expected to retain their places in the full-back positions with Stephan Lichtsteiner and Sead Kolasinac missing out.

Midfield: Lucas Torreira has been superb since breaking in to the first team in recent weeks and the Uruguayan international is set to start in the holding role once again this evening. Torreira is forging a solid partnership with Grant Xhaka so we should see the Swiss star keeping his place with Mohamed Elneny and Matteo Guendouzi then likely to come in for the Europa League clash with Sporting Lisbon on Thursday night.

Attack: We should see a couple of changes in attack tonight. Pierre-Emerick Aubameyang is pushing for a recall after coming off the bench to score twice during the 5-1 win over Fulham so I expect he’ll come in to the front line.

Aaron Ramsey is also expected to start after making a huge impression off the bench at Craven Cottage before the international break so he could be deployed in the No.10 role against Leicester this evening.

Mesut Ozil is the third player set to be recalled to the attack as the German playmaker has recovered from a back injury that kept him out of the Fulham game so he could be deployed from the right wing – as has been the case for much of the season.

Alexandre Lacazette is likely to keep his place up front as he’s been enjoying some excellent form of late so Danny Welbeck is expected to drop to the bench along with Henrikh Mkhitaryan.

Alex Iwobi has been superb in recent performances and arguably deserves to keep his place but with Ozil, Ramsey and Aubameyang all pushing for recalls, I think the Nigerian international may find himself back on the bench tonight. 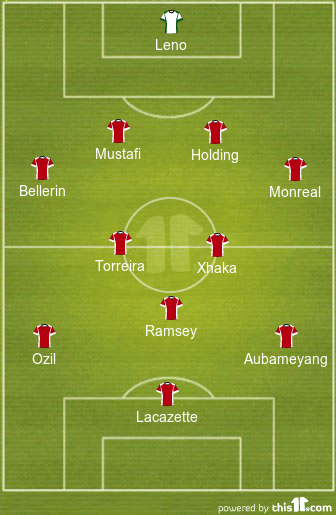