Pochettino has confirmed three players will miss Tottenham’s clash with PSV. Here is the team news and expected line-up for the game.

Tottenham will be looking to secure a much-needed win when they take on PSV Eindhoven in Holland on Wednesday night. Here is the latest team news and the side we think Mauricio Pochettino will select for the game…

The Tottenham boss held his pre-match press conference this evening and he confirmed that Danny Rose, Jan Vertonghen and Dele Alli remain out as they continue to overcome their respective injuries.

Rose has been carrying a groin injury this month and while he is believed to be edging closer to making his comeback the England international remains unavailable so Ben Davies is expected to continue at left-back tomorrow night.

Vertonghen has been nursing a hamstring injury in recent weeks and the Belgian international isn’t due to be back in contention until December so Davinson Sanchez is set to continue his partnership alongside Toby Alderweireld.

Pochettino confirmed that Alli is still working his way back to full fitness from a hamstring problem but Christian Eriksen is pushing for a recall and the Dane could come in for Moussa Sissoko despite his impressive display at West Ham.

?️ Mauricio on injuries: "Danny Rose, @JanVertonghen and @dele_official are still out. @ChrisEriksen8 is fit to be selected but we will see tomorrow if I decide for him to play from beginning or bench." #COYS pic.twitter.com/hdyRFQpvC5

Hugo Lloris will no doubt keep his place between the sticks with Paulo Gazzaniga acting as back-up but Pochettino may freshen things up at right-back with Serge Aurier pushing to replace Kieran Trippier.

Victor Wanyama remains out with a hamstring injury but Mousa Dembele made his return with a substitute appearance during the win over West Ham at the weekend so the Belgian international could come in for Harry Winks alongside Eric Dier in midfield.

Erik Lamela was the match winner at the London Stadium so the South American may have done enough to keep his place in attack but Hueng-min Son is expected to be recalled so Lucas Moura may be the man to drop out.

Tottenham hitman Harry Kane is certain to lead the line once more up front so Fernando Llorente will have to make-do with a place among the substitutes once more. 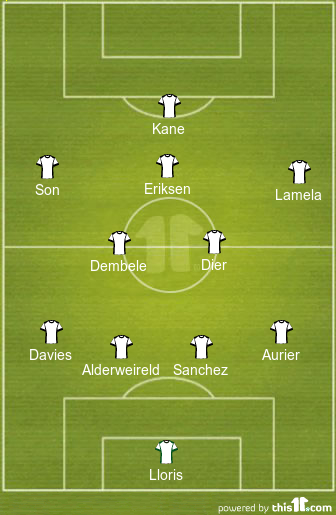