Liverpool take on Red Star Belgrade in the Champions League at Anfield on Wednesday night. Here is the team we think Jurgen Klopp will select:

Liverpool will be looking for a win when they take on Red Star Belgrade in the Champions League at Anfield on Wednesday night. Here is the team we think Jurgen Klopp will select:

Goalkeeper: Klopp has so far resisted the temptation so rotate his goalkeepers in the Champions League so I don’t see any reason to believe he’ll start doing so tomorrow. Therefore, Alisson should keep his place in goal with Simon Mignolet once again named on the bench.

Defence: Klopp has started Joe Gomez at right-back in the last two matches and the youngster has been excellent but I think we’ll see Trent Alexander-Arnold recalled against Red Star. The youngster was the player selected by Klopp to conduct the pre-match press conference and that’s usually a good indicator they will feature.

That may see Gomez moving back in to his usual position alongside Virgil van Dijk in the middle of defence so Dejan Lovren may drop to the bench. Andrew Robertson is almost certain to keep his place at left-back with Alberto Moreno once again among the substitutes.

Midfield: Liverpool will once again be without Naby Keita for the game tomorrow. The midfielder is back in light training after missing the Huddersfield Town game with a hamstring injury that he sustained during the international break but this game will come too soon.

Jordan Henderson has also been ruled out for at least the next two games after sustaining a hamstring injury at the John Smith’s Stadium but James Milner has been declared fit after recovering from a minor knock that he picked up at the weekend.

Georginio Wijnaldum is also passed fit after shaking off a knock so he should start in midfield while Fabinho could be in-line to make a rare start in the holding role. A midfield trio of Fabinho, Wijnaldum and Milner might be a little pedestrian so Klopp could be tempted to start Xhedran Shaqiri in a central role to add some creativity but Adam Lallana is unlikely to be risked again after making his comeback from injury at the weekend.

Attack: Liverpool have been boosted by the return of Sadio Mane as he’s back in contention after missing the Huddersfield game with a broken thumb so he could get an immediate recall in attack.

Mohamed Salah is expected to keep his place in the front three while Roberto Firmino is likely to be recalled up front with Daniel Sturridge dropping to the bench tomorrow night. 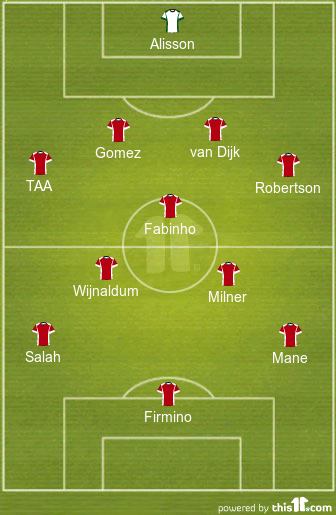