Arsenal take on Sporting Lisbon in the Europa League on Thursday evening. Here is the side Gooner Mac thinks Unai Emery will select for the game:

Arsenal will be looking to put one foot in the knockout stages with a win when they take on Sporting Lisbon in the Europa League on Thursday evening. Here is the side Gooner Mac thinks Unai Emery will select for the game:

Goalkeeper: Petr Cech is back in training after recovering from a hamstring injury but the 36-year-old hasn’t travelled to Portugal so Bernd Leno is expected to get another chance to impress between the sticks with Emi Martinez acting as back-up.

Defence: Sokratis is back in contention after overcoming an ankle injury that kept him out of the win over Leicester City so the Greek international is expected to come back in to the back four. Shkodran Mustafi could be the man to get a breather with Rob Holding keeping his place in the middle of defence.

Sead Kolasinac and Nacho Monreal have once again been ruled out as they continue to overcome hamstring injuries that prevented them from facing Leicester so Stephan Lichtsteiner may have to continue at left-back. Carl Jenkinson has travelled with the squad but I don’t see Emery throwing him in to action so Hector Bellerin is likely to start at right-back again.

Midfield: However, we should see some changes in midfield with Matteo Guendouzi and Mohamed Elneny pushing for recalls. They lined-up alongside each other in the previous Europa League match with Qarabag so I think Granit Xhaka and Lucas Torreira will be rested tomorrow evening.

Attack: Aaron Ramsey was in the squad that flew out of London today and the Welsh international is pushing for a recall after being named on the bench for the last two matches. Mesut Ozil was sensational against Leicester on Monday but I expect him to be rested tomorrow ahead of Sunday’s Premier League trip to Crystal Palace.

Alex Iwobi seems to be playing his way in to Emery’s first team plans with some excellent performances so he may be given a breather to save him for the Palace game while Henrikh Mkhitaryan may also make way.

Danny Welbeck is expected to come back in to the side while 18-year-old Emile Smith Rowe should also be given another chance to impress in attack after starting in the previous game against Qarabag.

Pierre-Emerick Aubameyang has scored four goals off the bench in our last two Premier League games so the Gabon international deserves to be recalled which may mean Alexandre Lacazette being given a rest against Sporting. 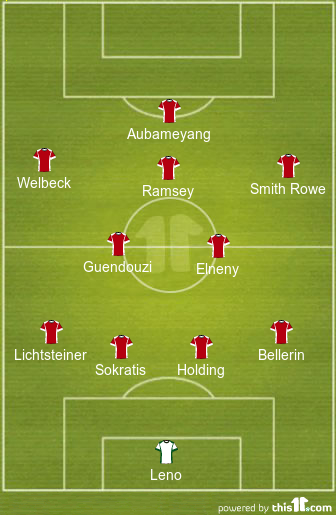